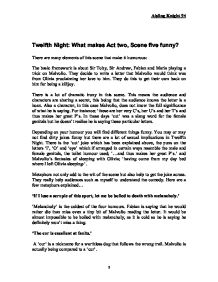 Twelfth Night: What makes Act two, Scene five funny? There are many elements of this scene that make it humorous: The basic framework is about Sir Toby, Sir Andrew, Fabian and Maria playing a trick on Malvolio. They decide to write a letter that Malvolio would think was from Olivia proclaiming her love to him. They do this to get their own back on him for being a killjoy. There is a lot of dramatic irony in this scene. This means the audience and characters are sharing a secret, this being that the audience knows the letter is a hoax. Also a character, in this case Malvolio, does not know the full significance of what he is saying. For instance; 'these are her very C's, her U's and her T's and thus makes her great P's. In those days 'cut' was a slang word for the female genitals but he doesn't realise he is saying these particular letters. Depending on your humour you will find different things funny. You may or may not find dirty jokes funny but there are a lot of sexual implications in Twelfth Night. There is the 'cut' joke which has been explained above, the puns on the letters 'I', 'O' and 'eye' which if arranged in certain ways resemble the male and female genitals, the toilet humour used; '...and thus makes her great P's.' ...read more.

The scene has also been performed in a very exaggerated pantomime style. One example is Fabian, Sir Toby and Sir Andrew trying to hide behind a ridiculously small tree. It was also on wheels and they'd move it every time Malvolio moved. It was plainly obvious they were there and they kept nearly getting caught out. This section was probably written not only to add comedy to the scene but also to illustrate how nieve Malvolio is. It is obvious now that he will believe this letter, after all, he already thinks Olivia likes him: 'Maria once told me she did affect me and I have herself come thus near, that should come thus near, that she should fancy, it should be one of my complexion.' Malvolio was making a fool out of himself before he even fell for the letter. He was fanaticising about being married to Olivia and toying with the idea of being 'Count Malvolio': 'Having been three months married to her sitting in my state- Calling my officers around me in my branched velvet gown...' He then goes on, after imagining being rich and royal, coming across the idea of power: 'I extend my hand to him thus, quenching my familiar smile with a austere regard of control- Saying 'Cousin Toby, my fortunes having cast me on your niece give me this prerogative of speech. ...read more.

Sir Toby: 'I could marry this wrench for this device' Sir Andrew: 'So could I too' Sir Toby: 'And ask no other dowry with her but such another jest' Sir Andrew: 'Nor I either' (Enter Maria) Sir Toby: 'Wilt thou set thy foot o my neck?' Sir Andrew: 'Or o mine either?' -And it goes on like this. Each character in this scene is funny in a different way, here are a few examples: Malvolio's behaviour is funny and we (the audience) tend to laugh at him not with him. Fabian is the fool so it is only logical that he cracks the most jokes. Sir Andrew is 'the thick one' (for reasons why, see above paragraph). To conclude; one of the things that I personally find most funny is the fact that the whole set-up is so far fetched! Not only is Malvolio a servant whereas Olivia is a Lady but from the way Malvolio is described, he seems rather unattractive compared to pretty elegant Olivia. It's not even as if Malvolio has a nice personality! -He is just a wishful thinker. He even says himself that he won't let his imagination run away from him yet that is exactly what he is doing! 'I do not now fool myself, to let imagination jade me; for every reason exites to this, that my lady loves me.' The whole scene is one big farce! Aisling Knight 94 3 1 ...read more.