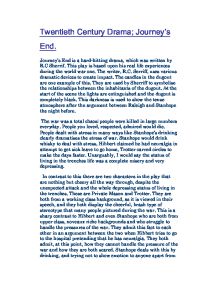 Twentieth Century Drama; Journey's End. Journey's End is a hard-hitting drama, which was written by R.C Sherrif. This play is based upon his real life experiences during the world war one. The writer, R.C. Serriff, uses various dramatic devices to create impact. The candles in the dugout are one example of this. They are used by Sherriff to symbolise the relationships between the inhabitants of the dugout. At the start of the scene the lights are extinguished and the dugout is completely black. This darkness is used to show the tense atmosphere after the argument between Raleigh and Stanhope the night before. The war was a total chaos; people were killed in large numbers everyday. People you loved, respected, admired would die. ...read more.

They admit this fact to each other in an argument between the two when Hibbert tries to go to the hospital pretending that he has neuralgia. They both admit, at this point, how they cannot handle the pressure of the war and how they are both scared. Stanhope deals with this by drinking, and trying not to show emotion to anyone apart from Osborne who he says is the only man he could talk to "man to man". In the final part of the scene we see how the relationship between Stanhope and Raleigh is more that just professional. As Stanhope hears news of men getting wounded, he acts calmly and plans the best course of action to help them, but when he hears of Raleigh's injuring he is affected by his friendship with Raleigh. ...read more.

When Stanhope gets no reply from Raleigh it is apparent that he is dead. This strikes stanhope and he sits down and does not move. It takes the soldier two attempts to get Stanhope attention. At the end of the play Sherriff leaves it to the audiences imagination about what happens to the rest of the company, not telling us if they live or die. This is a fully dramatic ending, in keeping with the rest of the play in which much is left to the imagination of the audience, and drawing conclusions. Finally, when you read the play you are left with an impression that war is dreadful and terrifying. Additionally, the play also shows how death was like when you could loose your intimate friend like Stanhope depended on Osborne and suddenly he died, in futility. Lastly, in my view, I feel Stanhope is a hero. ...read more.