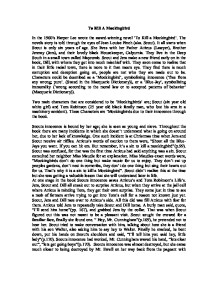 To Kill A Mockingbird In the 1960's Harper Lee wrote the award-winning novel 'To Kill a Mockingbird'. The novels story is told through the eyes of Jean Louise Finch (aka. Scout). It all starts when Scout is only six years of age. She lives with her Father Atticus (Lawyer), Brother Jeremy (Jem), and their lovely black Housekeeper, Calpurnia. They live in the Deep South in a small town called Maycomb. Scout and Jem make a new friend early on in the book, Dill, with whom they get into much mischief with. They soon come to realize that in their little racial town, there is more to it than meets eye. They find there is much corruption and deception going on, people are not who they are made out to be. Characters could be described as a 'Mockingbird', symbolizing innocence ('free from any wrong; pure'. (Stated in the Macquarie Dictionary)), or a 'Blue-Jay', symbolizing immorality ('wrong according to the moral law or to accepted patterns of behavior' (Macquarie Dictionary)). Two main characters that are considered to be 'Mockingbirds' are; Scout (six year old white girl) and Tom Robinson (25 year old black family man, who lost his arm in a machinery accident). ...read more.

Scout sought the crowed for a familiar face, finally she found one. " Hey, Mr. Cunningham"(p.169), he pretended not to hear her. Scout tried to make conversation with him, talking about how she is a friend with his son Walter, also asking him to say hey to Walter. Finally he cracked, he bent down, put his hands on Scout's shoulders and said, "I'll tell him you said hey, little lady"(p.170). Scouts innocence had worked, Mr. Cunningham waved his hand, "lets clear out", "lets get going boys"(p.170). Scouts innocence was almost destroyed, but she came much closer to being destroyed by Mr. Ewell on her way back from the pageant with Jem. Late at night when they were walking home Mr. Ewell jumped out of the bushes and tried to kill them. Lucky for Jem and Scout Boo Radley was out that night and stopped Mr. Ewell from killing them. Mr. Ewell was found dead and it was determined that his misfortune was an accident, that he had fallen onto his own knife therefore killing himself. Scout came so close to dying, and if she had of died her innocence would have been destroyed. ...read more.

She scared me so bad I hoped down. I got down off a that chair an' turned around an' she sorta jumped on me. 'She hugged me. She reached up and kissed me on the side of th' face. She said she aint kissed a grown man before an's she might as well kiss a nigger"(pp.212-215). Mayella wouldn't let him leave he asked her to many times, he didn't want to hurt Mayella but he had to push her out of the door way. Meanwhile Mr. Ewell heard what was happening and yelled, "you goddamn whore, I'll kill ya". Tom said he ran so fast he didn't know what happened next. Tom continued to prove his innocence in the case, but everyone knew a black man would never win against a white man. Tom Robinson's innocence was destroyed when he was shot in the back supposedly trying to run away from being taken to jail. In conclusion, 'it's a sin to kill a mockingbird' because they don't do any wrong. Scout has been represented as a mockingbird so if you were to kill Scout you would be committing a sin. And whoever killed Tom has sinned, for Tom was a proven mockingbird, someone who never did anything but please others. ...read more.