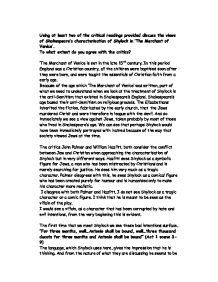 Using at least two of the critical readings provided discuss the views of Shakespeare&amp;#146;s characterisation of Shylock in &amp;#145;The Merchant of Venice&amp;#146;.

Using at least two of the critical readings provided discuss the views of Shakespeare's characterisation of Shylock in 'The Merchant of Venice'. To what extent do you agree with the critics? 'The Merchant of Venice is set in the late 15th century. In this period England was a Christian country, all the children were baptised soon after they were born, and were taught the essentials of Christian faith from a early age. Because of the age which 'The Merchant of Venice' was written, part of what we need to understand when we look at the treatment of Shylock is the anti-Semitism that existed in Shakespeare's England. Shakespeare's age based their anti-Semitism on religious grounds. The Elizabethans inherited the fiction, fabricated by the early church, that the Jews murdered Christ and were therefore in league with the devil. And so immediately we see a view against Jews, taken probably by most of those who lived in Shakespeare's age. We can see that perhaps Shylock would have been immediately portrayed with hatred because of the way that society viewed Jews at the time. The critics John Palmer and William Hazlitt, both consider the conflict between Jew and Christian when approaching the characterisation of Shylock but in very different ways. ...read more.

Shakespeare deliberately sets Shylock apart to emphasise his villainous characteristics. "But I will not eat with you...nor will I pray with you..." (Act 1 scene 3 lines 32 and 33). Here he clearly separates himself and rejects any ideas of socialising with his fellow man. I do not believe as Hazlitt says that Shylock has anything to do with 'justice' on his mind. After we find out in Act 1 scene 3 that Christians have mistreated Shylock you do not see any sign in Shylock that reflects a character who wants to be accepted. He goes on to express so much hatred and anger suggesting that he is not willing to forgive or change. It seems that his bad experiences with Christians have done nothing but surface a hatred, which was already there. "...The ancient grudge I bear him" (Act 1 scene 3 line 42) So what Shylock wants, above all, is revenge! Here we see Shylock speak of what his revenge will be, justifying it with the fact that he has been called a 'dog' and he has been 'spat upon'. He speaks later of this grudge as a fuel for his revenge, he says that it is a fight for his 'sacred nation.' ...read more.

He even compares himself to people in the bible! Hazlitt would not agree with me, as he thinks that the Christians are hypocrites. "...Rankest hypocrisy..." But I think we see this hypocrisy in Shylock more than once, in the trial scene he uses religious imagery in his arguments. "...By your holy Sabbath have I sworn" (Act 4 scene 1 line36) Shylock swore on a holy day that he would kill Antonio, murder does not reflect the person who values their religion. Palmer rightly says the trial scene is the climax of the whole play, it has built right up to this point when the inevitable for Shylock will happen. They both have very different views on Shylock's characterisation. I view Shakespeare's characterisation of Shylock to have real dramatic purpose in the play but I do not believe that he is wanting us to think that all the comedy in the play lies upon Shylock's character. Neither does he want us to see Shylock as tragic character that we should feel sympathy for. I believe that Shakespeare would not want us to see the comedy or tragedy of the play to lie in Shylock, but he wants us to see him as the villain of the play. He does not seem proved to be otherwise, and fits such a role perfectly. ...read more.