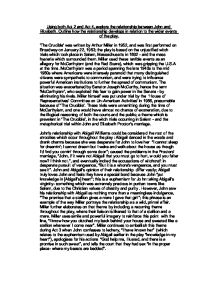 Using both Act 2 and Act 4, explore the relationship between John and Elizabeth. Outline how the relationship develops in relation to the wider events of the play. 'The Crucible' was written by Arthur Miller in 1952, and was first performed on Broadway on January 22, 1953; the play is based on the unjustified witch trials which took place in Salem, Massachusetts in 1692- and the mass hysteria which surrounded them. Miller used these terrible events as an allegory for McCarthyism (and the Red Scare), which was gripping the U.S.A at the time. McCarthyism was a period spanning the late 1940s to the mid 1950s where Americans were intensely paranoid that many distinguished citizens were sympathetic to communism, and were trying to influence powerful American institutions to further the spread of communism. The situation was exacerbated by Senator Joseph McCarthy, hence the term 'McCarthyism', who exploited this fear to gain power in the Senate- by eliminating his rivals. Miller himself was put under trial by the 'House of Representatives' Committee on Un-American Activities' in 1956, presumable because of 'The Crucible'. These trials were unremitting during the time of McCarthyism, and one would have almost no chance of exoneration, due to the illogical reasoning of both the courts and the public; a theme which is prevalent in 'The Crucible', in the witch trials occurring in Salem- and the metaphorical trial within John and Elizabeth Proctor's marriage. John's relationship with Abigail Williams could be considered the root of the atrocities which occur throughout the play: Abigail danced in the woods and drank charms because she was desperate for John to love her "I cannot sleep for dreamin'; I cannot dream but I wake and walk about the house as though I'd find you comin' through some door"; caused the problems in the Proctors' marriage, "John, if it were not Abigail that you must go to hurt, would you falter now? ...read more.

to intimidate the girls who danced with her, threatening them with a "pointy reckoning". Her personality is further warped by her passionate love for John Proctor, who only slept with her out of lust; when John says that "I will cut off my hand before I'll ever reach for you again" it hurts her, and drives her to feel intensely envious of Elizabeth (which leads her to accuse her of witchcraft so she may be with John) and release her wrath on Salem- and more specifically, Elizabeth. Miller has Abigail feel envy and wrath as a story device to build conflict, but also to show how these sins can wreak havoc on a society; this relates back to McCarthyism in the U.S.A as Miller's moral message here is that America is being torn apart by the envy and wrath of the 'House of Representatives' Committee on Un-American Activities'. In addition, these sins are set against the sixth commandment. "Thou shalt not murder" is contrasted against Abigail's false accusation of Elizabeth (amongst other townsfolk), which would ultimately lead to Elizabeth's unjust death and shows that Abigail is a heartless woman who is sacrificing people's lives for her own selfish needs. Now that I have analysed the key ideas which lie at the heart of 'The Crucible', I will now discuss how John and Elizabeth's relationship develops in relation to the wider events of the play- and the themes which are entailed within it. At the start of Act 2, the problems in John and Elizabeth's marriage are hinted at within the first paragraph. John's dissatisfaction at his marriage is signified by his disapproval of Elizabeth's cuisine, "Then he lifts out the ladle and tastes. He is not quite pleased". The phrase, "he is not quite pleased" signifies, in a literal sense, that John doesn't like the taste of the food; but the reason Miller has chosen these words is to convey the general condition of the Proctors' marriage- that it is displeasing to John, and is having problems due to John's infidelity and Elizabeth's coldness as a wife "Oh, Elizabeth, your justice would freeze beer!". ...read more.

Miller clearly based Danforth's character on Senator Joseph McCarthy to show that he sees McCarthy as a bigoted, power-hungry tyrant who is only interested in looking powerful and eliminating people who threaten his position. By Act 4, John and Elizabeth have become united through their ordeal and this is signified in their language, which is far more emotive, John says "You are a marvel- Elizabeth", which shows that John is again madly in love with Elizabeth and wants to express how much he cares for her. The progression of their relationship is echoed by the development in the wider events of the story: Reverend Hale has denounced the court and is trying "to save [John's] life" because "damnation's doubled n a minister who counsels men to lie"; the people of Salem have started to rebel against the court "you wander yet if rebellion's spoke? Better you should marvel how they do not burn your province!" and they have put a dagger in Parris' door. It seems like Salem is being purified, much like gold in a crucible, and all the deceit and pretence is being washed away. Additionally, as the witch trials come to their conclusion, the trial within the Proctors' marriage also comes to its resolution and this is the salvation John Proctor is searching for. Miller demonstrates this purification in John's mind using stage directions, Elizabeth says "I cannot judge you, John", there is a pause, and John says "What would you have me do" with the stage direction "simply, a pure question"; the word pure here indicates that John feels like he is close to redemption and this is confirmed when he says "I would have your forgiveness, Elizabeth". Miller chose to make he dialogue which follows strikingly emotionally charged, because it is when John is finally given forgiveness, there are emotive stage directions such as "he stands, as though with physical pain" "she is on the verge of tears" and "now pouring out her heart". ...read more.