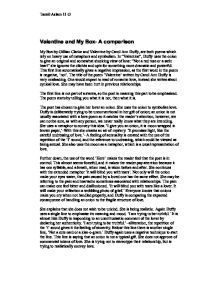 Valentine and My Box- A comparison

Valentine and My Box- A comparison My Box by Gillian Clarke and Valentine by Carol Ann Duffy, are both poems which rely on heavy use of metaphors and symbolism. In "Valentine", Duffy uses the onion to give an original and somewhat shocking view of love: "Not a red rose or a satin heart" she ignores the clich�s and opts for something more dramatic and powerful. This first line automatically gives a negative impression, as the first word in the poem is negative, 'not'. The title of the poem 'Valentine' written by Carol Ann Duffy is very misleading. One would expect to read of romantic love, instead she writes about cynical love. She may have been hurt in previous relationships. The first line is not part of a stanza, so the poet is meaning this part to be emphasised. The poem starts by telling you what it is not, then what it is. The poet has chosen to give her lover an onion. She uses the onion to symbolize love. Duffy is deliberately trying to be unconventional in her gift of onion; an onion is not usually associated with a love poem so it catches the reader's attention, however, we can not be sure, as with any person, we never really know what they are intending. She uses a metaphor to convey this idea. 'I give you an onion, it is moon wrapped in brown paper,'-With this she creates an air of mystery. ...read more.

'Its scent will cling to your fingers, cling to your knife.� She is stating that love has such a possessive grasp on her, it clings to her. She expresses these sentiments in the extended metaphor. She states that sometimes people never recover from a broken romance. They will continue to experience heartache, pain and bitterness. 'Its scent will cling to your fingertips, cling to your knife.' The repetition of the word 'cling' is effective. The word 'knife' conveys the image of a wound, and the sharpness of their relationship, as well as love in general. This may be due to the fact that the poet has obviously been hurt in previous relationships. In "My Box", the books, the box and the "golden tree" symbolise the relationship between the author and her partner. The books especially show the long lifetime spent together. They describe the time spent with each other, the enjoyment, the things they did. This poem is similar to the last in the fact that they both give the impression of layers. In "Valentine" it is the onion itself, with its skin and the insides that show this. In "My Box", the fact that the memories are in the words, the words written in the books, the books in the box made of golden oak, shows this. Valentine shows that inside a plain wrapping, one might find something special if one searches for it, and unwraps the layers. ...read more.

'Words� could be referring to what you say to people and how they affect you and them. It also says that 'words� were harvested, in the last stanza. 'A box� means her whole life with her partner and her experiences. 'Books� are the twelve books that she has written in which shows her memories. The 'Golden tree� is the core of the poem, it is a metaphor for love and how it was nurtured from a seed, faces the good and bad experiences and how it flourishes into something beautiful. There are some similarities and differences between the poems. Both are about gifts given to someone by their lovers. Even though the gifts are very different, a box and an onion, they are both ways of telling the lover how much they admire them. The tone of each of the poems is different. In "My Box" the tone is a warm feeling one, that is portrayed through warm sounding words such as 'golden oak� and 'heartsease�. "Valentine" has quite an aggressive feel to it. This may be due to all the single lined sentences, and the single word sentences such as 'lethal�. Most of these sound like orders, 'Take it.� and 'Here' for example. The two poems also have quite different intentions. "My Box" has no moral, except maybe to emphasise to the reader that life is too short, but is rather a story about her life and memories, whereas "Valentine" is intentionally unconventional to highlight her passion and love for him. Tanzil Aslam 11 O ...read more.