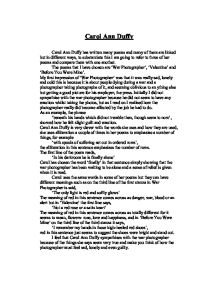 Carol Ann Duffy Carol Ann Duffy has written many poems and many of them are linked but in different ways, to substantiate this I am going to refer to three of her poems and compare them with one another. The poems that I have chosen are 'War Photographer', 'Valentine' and 'Before You Were Mine'. My first impression of 'War Photographer' was that it was really sad, lonely and cold this is because it is about people dying during a war and a photographer taking photographs of it, and seeming oblivious to anything else but getting a good picture for his employer, the press. Initially I did not sympathise with the war photographer because he did not seem to have any emotion whilst taking the photos, but as I read on I realised how the photographer really did become affected by the job he had to do. As an example, the phrase 'beneath his hands which did not tremble then, though seem to now', showed how he felt slight guilt and emotion. ...read more.

Carol also anticipates the reader's feelings when they would read the article in the paper with the photo that the war photographer would have taken, and I feel that she is exactly right with what she says, 'The readers eyeballs prick with tears between the bath and pre-lunch beers.' Meaning that they would be just following their normal routine, see the photo in the just delivered paper lying on the floor and then be upset whilst reading and seeing the photo, but then once they had finished with the paper, they would forget all about it and resume their normal life. Carol Ann Duffy finishes off War Photographer really well when she says, 'from the aeroplane he stares impassively at where he earns his living and they do not care', this effectively brings us back to the beginning because no-one cares about his feelings and they do not realise that he has emotions such that he would probably be feeling again like being in a room alone just as he was at the beginning, the editor would just want good photos not caring about the photographer who has become a fellow sufferer. ...read more.

The alliteration in this shows the poet's anger or emotion and the repetition suggests increased desperation. Carol Ann Duffy's language in this poem seems gentle and soft at the beginning but as it ends it seems rather fierce; also the whole poem seems very quick and to the point with the short sentences and many full stops used. Near the end there is a hint of a split between the two, a divorce, or death. 'For as long as we are'. 'Take it' is in the last stanza, it is a command that shows aggression in the person and a sense of emotion. 'lethal' is also there which is very aggressive too, it is a traditional symbol of reduced love and the last lines of the stanza to finish off the poem reads, 'Its scent will cling to your fingers, cling to your knife'. The word cling has many connotations, something unwanted, unworthy, weak and desperate. These finishing lines give the impression that the person will always be there and you can never get rid of them, and their scent will stay with them forever. ...read more.