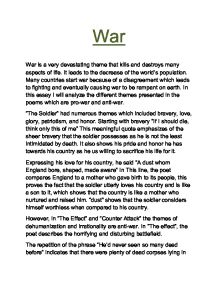 War Poetry. The Soldier had numerous themes which included bravery, love, glory, patriotism, and honor. However, in The Effect and Counter Attack the themes of dehumanization and irrationality are anti-war.

War War is a very devastating theme that kills and destroys many aspects of life. It leads to the decrease of the world's population. Many countries start war because of a disagreement which leads to fighting and eventually causing war to be rampant on earth. In this essay I will analyze the different themes presented in the poems which are pro-war and anti-war. "The Soldier" had numerous themes which included bravery, love, glory, patriotism, and honor. Starting with bravery "If I should die, think only this of me" This meaningful quote emphasizes of the sheer bravery that the soldier possesses as he is not the least intimidated by death. ...read more.

"dust" shows that the soldier considers himself worthless when compared to his country. However, in "The Effect" and "Counter Attack" the themes of dehumanization and irrationality are anti-war. In "The effect", the poet describes the horrifying and disturbing battlefield. The repetition of the phrase "He'd never seen so many dead before" indicates that there were plenty of dead corpses lying in front of the person, which both shocked and astonished him. In this quote imagery was present making that reader imagine the terrifying and disturbing scene that the soldier stood before. Dehumanization is shown as "Don't count 'em; they're too many. ...read more.

out to grunt and wriggle: none heeded him; he chocked" and "Down, and down, and down, he sank and drowned, bleeding to death. The counter-attack had failed" These lines take us to the scene where the soldier is dying slowly and painfully. "knocked" proves that the people where savages during war, "he sank and drowned, bleeding to death" show a very painful scene which is the scene of the soldier covered with his own blood, slowly and painfully dieing. In conclusion, the poets used different techniques and themes in thier poems to express the two conflicting views about war. I personally think that the poets were successful in using poetic techniques and figurative language to convey their point of view ...read more.