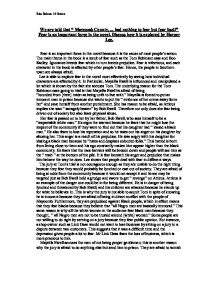 We are told that &quot; Maycomb County.... had nothing to fear but fear itself&quot; Fear is an important force in the novel. Discuss how it is explored by Harper Lee.

We are told that " Maycomb County.... had nothing to fear but fear itself" Fear is an important force in the novel. Discuss how it is explored by Harper Lee. Fear is an important force in the novel because it is the cause of most people's action. The main theme in the book is a result of fear such as the Tom Robinson case and Boo Radley. Ignorance breeds fear which in turn breeds prejudice. Fear is infectious, and each character in the book is affected by other people's fear. Hence, the people in Southern town are always afraid. Lee is able to explore fear in the novel most effectively by seeing how individual characters are affected by it. In Particular, Mayella Ewell is influenced and manipulated a lot which is shown by the fact she accuses Tom. The underlying reason for the Tom Robinson case going to trial is that Mayella Ewell is afraid of being "hounded from [their] midst as being unfit to live with." Mayella is forced to put an innocent man in prison because she wants to put the " evidence of her crime away form her" and save herself from another punishment. She has reason to be afraid, as Atticus implies she was " savagely beaten" by Bob Ewell. ...read more.

Tom was afraid of court because he knew it was unjust, this is implied when he tells Gilmer that he was " scared [he'd] hafta face up to what [he] didn't do." This suggests that he feared the injustice of the town. The town would persecute him either way, if he were acquitted then Ewell would want revenge and if he wasn't then he would go to the electric chair. He ran off the Ewell place and tried to escape from prison because he was more afraid of what the white men would do to him. The other main theme in this book is the children's discovery of the real Boo Radley. The primary reason for Boo Radley staying inside his house, is "because he wants to stay inside." When Jem is trying to understand why Aunt Alexandra thinks Walter Cunningham is " trash" he realises that " it ain't right" and this injustice and ignorance is why Boo stays inside his house out of preference. He is "shy" and afraid of being "despised." He doesn't like the outside world because people just " can't ... get along." He fears this ignorance; it is that which makes the vicious rumours. ...read more.

As Jem and Scout were put into an unknown situation and were very frightened, they were saved by the man that they feared because he was unknown. It is here that the children are able to realise that all along it is he who is afraid of the world. Lee is able to show that they all fear something, which can bring them together. Lee explores fear in several situations and shows it clearly as a strong force in the book by every character being individually affected by it. Throughout the novel it is rarely, directly referred to and yet is such a powerful force behind so many of the actions. Lee explores the emotion in many forms and ultimately Scout shows that although she has discovered that people can be evil in unfathomable ways, she still upholds her faith in humankind and can face anything with courage. Unlike Dill, she finds that the real world does follow patterns, and once one knows them, the world of fantasy and books is the only place where real fear can exist. From the beginning of the novel, where scout has a fear of Boo, school and things she didn't understand Scout has grown to understand that fear is unnecessary. In this way all of Maycomb County fears something irrational, they fear, fear. Rita Bulusu 10 Bruce ...read more.