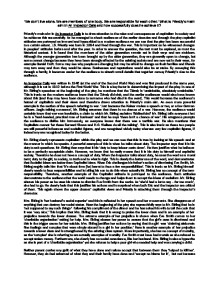 'We don't livealone. We are members of one body. We are responsible for each other.' What isPriestly's main aim in An Inspector Calls and how successfully does heachieve it?

'We don't live alone. We are members of one body. We are responsible for each other.' What is Priestly's main aim in An Inspector Calls and how successfully does he achieve it? Priestly's main aim in An Inspector Calls is to draw attention to the roles and consequences of capitalism in society and he achieves this successfully. As he managed to shock audiences of the earlier decades and through the play capitalist attitudes are portrayed as immoral and hypocritical to a modern audience we can see that the play has been successful to a certain extent. J.B. Priestly was born in 1894 and lived through the war. This is important as he witnessed changes in peoples' attitudes before and after the year. In order to answer the question, the text must be explored, as must the historical context. It is found that the members of the older generation remain set in their ways and are stubborn. Although the younger generation has been brought up by the older generation, they are generally open to change, but some cannot change because they have been strongly affected by the existing society and are now set in their ways, for example Gerald Croft. Some may see why people are changing but may be afraid to change as their families and friends may turn away and then they would be alone. Businesses and reputations would also be at stake. By conveying this through a family, it becomes easier for the audience to absorb small details that together convey Priestly's view to the audience. An Inspector Calls was written in 1945 (at the end of the Second World War) and was first produced in the same year, although it is set in 1912 before the First World War. This is a key factor in determining the impact of the play. In one of Mr. Birling's speeches at the beginning of the play, he mentions that the Titanic is 'unsinkable, absolutely unsinkable.' ...read more.

There is evidence that Gerald does mature, as he says to Mrs. Birling, 'And I don't think it's a very good idea to remind him,' following her mention of Mr. Birling's social status. He shows some awareness of the Inspector's true identity and this is an example of his maturity, but it is not nearly as noticeable as Sheila's. However, he seems reluctant to change as he would be putting his reputation at stake and his job would be jeopardised. Although changing would be better for society, Gerald appears to be intimidated by capitalists like Mr. Birling and Mr. Croft and appears to be generally content with his way of life. When talking about his relationship with Daisy Renton, he tells the story without being prompted or forced into telling the truth. This shows that although he is sorry for what he did, he does not really have any regrets of the affair as he enjoyed the role he played in her life. 'All right - I did [enjoy it] for a time. Nearly any man would have done.' His honesty is a quality worth noting, and like Eric and Sheila, when he confesses, he feels partially responsible for her death. This shows that although he may be considered as a Capitalist, he does have a social conscience and is not afraid to show this to a certain extent. Men in this society are not allowed to show their emotions. This is why Gerald leaves the house as he has been through a harsh ordeal and wants to be alone. He asks if he may return and this is because he still loves Sheila and would like to marry her but he understands when she says that they 'aren't the same people who sat down to dinner'. As he understands this, he is mature. Sheila's relationship with Gerald does not appear to be based entirely on love, as they do not seem very affectionate towards each other. ...read more.

However, it is important to find out that the younger generation 'who think they know it all' do indeed know more than there parents who refuse to change as long as their images are not at stake. Gerald does not show anything that can decide whether or not he has changed. As the younger generation have changed, Priestly is saying that there is hope for the world, but we need to persevere. The play is trying to warn us of the consequences of our actions and makes us think about the effects our actions have on others. It is important that within the play, the whole world is represented. This makes the play a success as everyone an relate to it. However, we must remember that it is only a play, and that it is not accessible to everyone. Therefore, it cannot have that much of an effect on people. People who watch the play may be affected by it, but there is no guarantee that everyone will react in the same way. As a modern audience, it was generally found that the play was effective and was shocking but it may not have the same effect on members of the older generation who are the people who are currently deciding our future. The play has not been successful, however, as there was another world war and there have been many wars since. At the moment, the world is on the brink of war. If the leaders of the opposing sides were to watch the play, they are unlikely to change their minds, as being members of the older generation, they are set in their ways. By drawing attention to the potential consequences of actions and through exaggerated characters, Priestly achieves his aim. However, although the play is successful in shocking audiences, it has not been very successful in altering the course of the world. Attitudes have turned towards the Socialist viewpoint but there are strong elements of Capitalism in society today. ...read more.