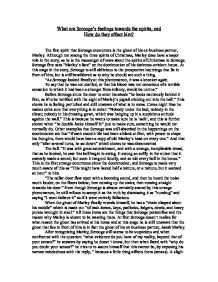 What are Scrooge's feelings towards the spirits, and How do they affect him?

What are Scrooge's feelings towards the spirits, and How do they affect him? The first spirit that Scrooge encounters is the ghost of his ex-business partner, Marley. Although not among the three spirits of Christmas, Marley does have a major role in the story, as he is the messenger of news about the spirits of Christmas to Scrooge. Scrooge first sees "Marley's face" on the doorknocker of his darkness-stricken house. At this stage in the story, Scrooge is still oblivious to the prospective hauntings that lie in front of him, but is still bewildered as to why he should see such a thing. "As Scrooge looked fixedly at this phenomenon, it was a knocker again. To say that he was not startled, or that his blood was not conscious of a terrible sensation to which it had been a stranger from infancy, would be untrue." Before Scrooge shuts the door to enter his abode "he looks cautiously behind it first, as if to be terrified with the sight of Marley's pigtail sticking out into the hall." This shows he is feeling perturbed and still unaware of what is to come. Come night time he makes extra sure that everything is in order: "Nobody under the bed; nobody in the closet; nobody in his dressing gown, which was hanging up in a suspicious attitude against the wall." This is because he wants to make sure he is 'safe', and this is further shown when "he double-locks himself in" just to make sure, something he would not normally do. ...read more.

Because " he spoke before the hour bell had sounded" the ghost does arrive and with a grand entrance. "Light up in the room upon the instant, and the curtains of his bed were drawn." The spirit itself is described as "child-like yet like an old man" This is to give a contrast between Scrooge's past (child-like) and his present(old man). It says in the text that "The voice was soft and gentle" which indicates that the spirit has a calm personality and "instead of being beside him, it were at a distance" which shows the ghost might have been shy. The ghost also is shown to represent light, which is symbolic of goodness and caring. Scrooge's first reaction is one of mystery and bamboozlement. He asks a lot of questions such as "who and what are you?" and is a bit scared as he "disclaims all intension of offending the Spirit." Also, although the spirit is the smallest and seems to be the shyest of the spirits, he does talk a great deal. The first place the spirit takes him is his old road where he used to live. During the visit a tear runs down Scrooge's cheek, which reveals his more emotional side and begins to show the change occurring in Scrooge very early on in the story. This is very different to how Scrooge would usually behave and with the change coming so early on in the story, one knows that this will somehow be a happy ending. ...read more.

Ha, ha, ha!" "Spirit" says Scrooge shuddering from head to foot, "I see, I see. The case of this unhappy man might be my own" this is when Scrooge recoils in terror and begins to realize that the old, dead man might be himself. There is a change of scene, in which "He finds himself at the foot of the bare bed" with a dead body, which has been robbed of a shirt and bed curtains taking away his dignity. "A pale light, rising in the outer air fell straight upon the bed; and on it, plundered and bereft, unwatched, unwept, uncared for was the body of this man." Still pondering over who this poor sole is, when the spirit points to the corpse for Scrooge to look at the face of the body, Scrooge is reluctant to do so, and begins to get more weary towards the ghost, "Spirit, this is a fearful place. In leaving it, I shall not leave its lesson, trust me let us go." Scrooge says this without looking at the face of the dead man because he is afraid that the body in front of him might be himself. At this point, Scrooge's transformation from bad to good is almost complete, but the spirit wants to fully fulfill his purpose for coming to Scrooge and therefore shows him two more visions. First of a family who are relieved at his death for now their "debts will be wavered" for some time, "we may sleep tonight with light hearts." The only emotion caused by the man's death is one of "pleasure" and Scrooge is horrified ...read more.