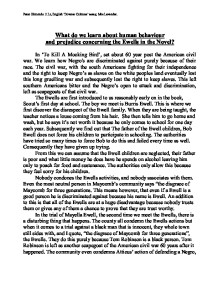 What do we learn about human behaviour and prejudice concerning the Ewells in the Novel?

What do we learn about human behaviour and prejudice concerning the Ewells in the Novel? In 'To Kill A Mocking Bird', set about 60 year post the American civil war. We learn how Negro's are discriminated against purely because of their race. The civil war, with the south Americans fighting for their independence and the right to keep Negro's as slaves on the white peoples land eventually lost this long gruelling war and subsequently lost the right to keep slaves. This left southern Americans bitter and the Negro's open to attack and discrimination, left as scapegoats of that civil war. The Ewells are first introduced to us reasonably early on in the book, Scout's first day at school. ...read more.

From this we can assume that the Ewell children are neglected, their father is poor and what little money he does have he spends on alcohol leaving him only to poach for food and sustenance. The authorities only allow this because they feel sorry for his children. Nobody condones the Ewells activities, and nobody associates with them. Even the most neutral person in Maycomb's community says "the disgrace of Maycomb for three generations. This means however, that even if a Ewell is a good person he is discriminated against because his name is Ewell. An addition to this is that all of the Ewells are at a huge disadvantage because nobody trusts them or gives any of them a chance to prove that they are trust worthy. ...read more.

The Negro's sit in their own section above the whites of Maycomb County purely so that the whites don't have to look at a another black person apart from the accused, Tom Robinson. Even after the Ewells win the racially unfair trial we still discover a grudge, they swear revenge on Atticus just because he dared to challenge white supremacy by defending a Negro man in a case against a white person. In conclusion, I think it is safe to say that racism used to play a big part in human behaviour, and in some communities still does. So I deduce that no matter what someone thinks of someone else, in the end it comes down to the colour of their skin. ?? ?? ?? ?? Peter Edmonds 11Lr, English 'Diverse Cultures' essay, Mrs Lavender. ...read more.