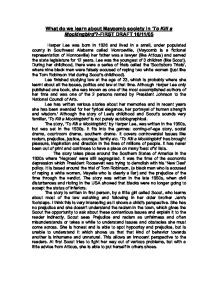 What do we learn about Maycomb society in 'To Kill a Mockingbird'?-FIRST DRAFT 16/11/05 Harper Lee was born in 1926 and lived in a small, under populated county in Southwest Alabama called Monroeville, (Maycomb is a fictional representation of Monroeville) her father was a lawyer (like Atticus) and served the state legislature for 12 years. Lee was the youngest of 3 children (like Scout). During her childhood, there were a series of trials called the 'Scottsboro Trials', where nine black men were falsely accused of raping two white women (just like the Tom Robinson trial during Scout's childhood). Lee finished studying law at the age of 23, which is probably where she learnt about all the issues, politics and law at that time. Although Harper Lee only published one book, she was known as one of the most accomplished authors of her time and was one of the 2 persons named by President Johnson to the National Council of Arts. Lee has written various stories about her memories and in recent years she has been awarded for her 'lyrical elegance, her portrayal of human strength and wisdom.' Although the story of Lee's childhood and Scout's sounds very familiar, 'To Kill a Mockingbird' is not purely autobiographical. The story, 'To Kill a Mockingbird,' by Harper Lee, was written in the 1950s, but was set in the 1930s. ...read more.

Lee doesn't only show the bad side of the society, it is the moral nature of human beings. Writing the book in a child's perspective dramatizes children's innocence, where they assume that all people are good because they have never seen evil, and the must incorporate it into their understanding of the world. People like Tom Robinson and Boo Radley (the 2 mockingbird figures) are not prepared for the evil that they receive and because of this they are in distraught and destroyed. The book covers various themes relating to issues of the time like courage, family, justice and prejudice and hatred. Also the image of the mockingbird occurs frequently in the book. Although there is not really a literal connection to the Mockingbird, the symbol of the mockingbird carries a lot of weight in the book. Boo Radley is one of the main mockingbird figures in the book. Miss Maudie explains to Scout '... They don't do one thing but sing their hearts out for us. That's why it's a sin to kill a mockingbird.' The wrongs of killing a mockingbird are obvious, but when I was researching the topic, it shows that it becomes a metaphor for the injustice of harming innocent and vulnerable people; 'the senseless slaughter of songbirds.' ...read more.

People who kept to themselves in Maycomb were considered to be 'misfits' or 'outsiders'. The Radleys were considered misfits because they didn't pay social calls like the mass of Maycomb. People were also superstitious at that time which cause them to gossip about the well-being of Boo Radley who they thought was dead as they had not seen him for years... they made him a ghost and each one made their own stories about him. New comers in Maycomb, like Miss Caroline were unaware of the situation of the people of Maycomb and how badly affected they were with the depression. When Scout hints to Miss Caroline that she shouldn't give Walter Cunningham money for his lunch because he'll never be able to pay her back by saying 'he's a Cunningham' Miss Caroline is confused as she is unaware of their situation at home, unlike the rest of Maycomb that have known that for a long time. The racism in Maycomb was strong. Miscegenation did not have a place in Southern society. Mr. Dolphus' mixed children are pitied because 'coloured folks won't have 'em because they're half white; white folks won't have 'em because they're coloured, they're just the in-betweens, don't belong anywhere' because the mixing of race was not tolerated, the people of Maycomb had to justify their beliefs to themselves and others. JENAI KAVARANA 10RH ...read more.