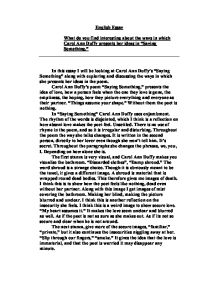 What do you find interesting about the ways in whichCarol Ann Duffy presents her ideas in &quot;Saying Something.&quot;

English Essay What do you find interesting about the ways in which Carol Ann Duffy presents her ideas in "Saying Something." In this essay I will be looking at Carol Ann Duffy's "Saying Something" along with exploring and discussing the ways in which she presents her ideas in the poem. Carol Ann Duffy's poem "Saying Something," presents the idea of love, how a person feels when the one they love is gone, the emptiness, the hoping, how they picture everything and everyone as their partner. "Things assume your shape." Without them the poet is nothing. In "Saying Something" Carol Ann Duffy uses enjambment. The rhythm of the words is disjointed, which I think is a reflection on how absent love makes the poet feel. Unsettled. There is no use of rhyme in the poem, and so it is irregular and disturbing. Throughout the poem the way she talks changes. It is written in the second person, directly to her lover even though she won't tell him. ...read more.

As if its not so secure and clear when he is not around. The next stanza, give more of the secure images, "familiar," "private," but it also continues the insecurities niggling away at her. "Slip through our fingers," "smoke." It gives the idea that the love is immaterial, and that the poet is worried it may disappear any minute. The third stanza develops these feelings further. "I dreamed I was not with you." She is scared of being left alone, without him. Its as if she has no one in the world except him. "I stared at strangers, searching for a word to make them you." Like she cant interact with anyone except him. She feels lonely and empty even desperate when he is not there. It's a dread, which she hides from her lover, and it is obvious they don't talk about the problem. "The dreams we have no phrases for..." ...read more.

"Walking home I see you turning on the lights. I come in from outside calling you name, saying something." Saying something refers to her calling his name. His name says something. It's important unlike the words such as "sweetheart," which she believes are empty and insubstantial. The communication also shows identity and belonging. Which is what she wants to feel, but cant when he is not next to her. The light extends this and gives an idea of positivity. Him being back gives her this, and her insecurities are no longer there. In conclusion I find quite a few things in "Saying Something" interesting. I like the way Carol Ann Duffy used enjambment, to unsettle the piece and bring across the feelings of apprehension. I also like the word use to show these feelings. I especially like the choices of the words "slip", and "smoke" in stanza three. These are very effective. But my favourite sentence has to be "the ghost of love" because it really gives the image of the woman in the poem disappearing away because her partner is not there. ...read more.