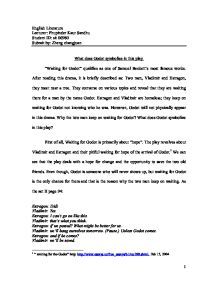 What does Godot symbolise in this play.

English Literature Lecturer: Phupinder Kaur Sandhu Student ID: sit 06980 Submit by: Zheng changjuan What does Godot symbolise in this play. "Waiting for Godot" qualifies as one of Samuel Beckett's most famous works. After reading this drama, it is briefly described as: Two men, Vladimir and Estragon, they meet near a tree. They converse on various topics and reveal that they are waiting there for a man by the name Godot. Estragon and Vladimir are homeless; they keep on waiting for Godot not knowing who he was. However, Godot will not physically appear in this drama. Why the two men keep on waiting for Godot? What does Godot symbolize in this play? First of all, Waiting for Godot is primarily about "hope". The play revolves about Vladimir and Estragon and their pitiful waiting for hope of the arrival of Godot.1 We can see that the play deals with a hope for change and the opportunity to save the two old friends. Even though, Godot is someone who will never shows up, but waiting for Godot is the only chance for them and that is the reason why the two men keep on waiting. As the act II page 94: Estragon: Didi Vladimir: Yes. Estragon: I can't go on like this. ...read more.

Beside that, a directed result of this haplessness is the daily struggles to pass the time. Thus, most of the play is dedicated to devising games which will help them pass the time. This mutual desire also addresses the question of why they stay together. Both Vladimir and Estragon admit to being happier when apart. One of the main reasons that they continue their relationship is that they need one another to pass the time. From the drama, page 69: Vladimir: that passed the time. Estragon: it would have passed in any case. And later when Estragon finds his boots again: Vladimir: what about trying them. Estragon: I've tried everything. Vladimir: No, I mean the boots. Estragon: would that be a good thing? Vladimir: it'd pass the time. I assure you, it'd be an occupation. (Page 69) Since passing the time is their mutual occupation, Estragon struggles to find games to help them accomplish their goal.3 Thus they engage in insulting one another and in asking each other questions. Whether or not Godot exists does not make any difference. The belief in him keeps two people from killing themselves, yet living in a ditch. It keeps them away from the places where they want to go and at the same time, it keeps them together.4 This belief serves the most important function: it gives purpose to their lives. ...read more.