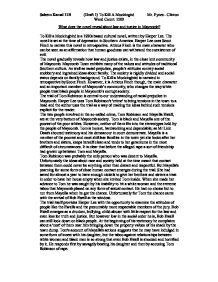 What does the novel reveal about law and justice in Maycomb?

What does the novel reveal about law and justice in Maycomb? To Kill a Mockingbird is a 1930s based cultural novel, written by Harper Lee. The novel is set at the time of depression in Southern America. Harper Lee uses Scout Finch to narrate this novel in retrospective. Atticus Finch is the main character who can be seen as an affirmation that human goodness can withstand the coexistence of evil. The novel gradually reveals how law and justice exists, in the close knit community of Maycomb. Maycomb Town exhibits many of the values and attitudes of traditional Southern culture. As well as racial prejudice, people's attitudes convey social snobbery and ingrained ideas about family. The society is rigidly divided and social status depends on family background. To Kill a Mockingbird is narrated in retrospective by Scout Finch. However, it is Atticus Finch though, the main character and an important member of Maycomb's community, who changes the way white people treat black people in Maycomb's corrupt society. The trial of Tom Robinson is central to our understanding of racial prejudice in Maycomb. Harper Lee uses Tom Robinson's 'crime' to bring tensions in the town to a head and the author uses the trial as a way of making the ideas behind such tensions explicit for the reader. The two people involved in the so-called crime, Tom Robinson and Mayella Ewell, are at the very bottom of Maycomb society. ...read more.

He responds first by savagely beating his daughter and then by accusing Tom Robinson of rape. Whatever respect or sympathy the reader might have had for Bob Ewell is dispelled by his behaviour in the courtroom and the evidence that Atticus produces that he was the cause of Mayella's beating. Not only is he a self-righteous bully but he is prepared to sacrifice Tom Robinson's life for his own selfish ends. The reader is more likely to feel sympathy for Mayella as the trial progresses. Her loneliness and need for simple human contact are made painfully evident as Scout comes to understand that she is 'the loneliest person in the world', rejected by white people because of her poverty and unable to mix with Negroes because she is white. The causes of her behaviour are made clear and Maycomb's social and racial prejudice have a large part of the blame. In his summing up, Atticus explains her accusation of rape in terms of guilt. She has committed no crime, she has merely broken a rigid and time-honoured code of our society, a code so severe that whoever breaks it is hounded from our midst as unfit to live with. Atticus says explicitly that she is 'the victim of cruel poverty and ignorance' but he cannot condone her actions because her solution involves 'putting away the evidence' and that evidence is the life of a human being. ...read more.

The advantage of using a court case to highlight attitudes is that the legal process requires everything to be as explicit as possible. Views and behaviours that would normally be understood by the majority of adults have to be put into simple enough language for a child to understand them. The advantage of having the trial narrated by Scout is that her childish understanding is free of adult prejudice and expectations. She and Jem measure the proceedings against simple child-like ideas of truth and justice and find them grossly wanting. On the other hand Jem is an expert on court behaviour from watching her father on other occasions so she is able to give an insightful account into most aspects of the trial. In conclusion, To Kill a Mockingbird reveals that law and justice is in order but justice is not given to its people because of the corrupt and divided society the people of Maycomb live in. After the events of The Tom Robinson case shows the ugliness of both racial and social prejudice. Ultimately the jurors choose to vote along racial lines without regard for truth or justice. Mayella and Tom are both victims of Maycomb's prejudice but only Tom has to pay. However, Atticus' strict belief in equality and giving people a second chance, has led Maycomb to become a better place, where black people are now being treated as equals. ?? ?? ?? ?? Saleem Kamal 11B (Draft 1) To Kill A Mockingird Mr. Fynes- Clinton Word Count: 1500 ...read more.