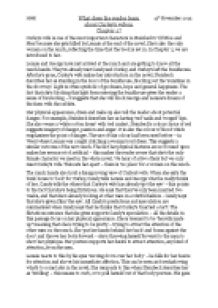 What does the reader learn about Curley's Wife (in Of Mice and Men) from Chapter 2?

Transfer-Encoding: chunked ﻿HWK What does the reader learn 11th November 2015 about Curley?s wife in Chapter 2? Curley?s wife is one of the most important characters in Steinbeck?s ?Of Mice and Men? because she gets killed by Lennie at the end of the novel. She?s also the only women on the ranch, reflecting the time that the book is set in. In Chapter 2, we are introduced to her. Lennie and George have just arrived at the ranch and are getting to know all the ranch hands. They?ve already met Candy and Curley, and Curley?s left the bunkhouse. After he?s gone, Curley?s wife makes her introduction in the novel. Steinbeck describes her as standing in the door of the bunkhouse, blocking out the ?sunshine in the doorway.? Light is often symbolic of goodness, hope and general happiness. ...read more.

This suggests a similar outcome of the new ranch. The fact her physical features are so focused upon makes her seem sort of artificial ? this makes the reader aware that she?s the only female character we meet in the whole novel. We hear of a few others but we only meet Curley?s wife. This sets her apart ? there is ?no place? for a women on the ranch. The ranch hands also hold a disapproving view of Curley?s wife. When she exits the bunk house to ?look? for Curley, Candy tells Lennie and George what he really thinks of her. Candy tells the others that Curley?s wife has already ?got the eye? ? this points to the fact that she?s being flirtatious. ...read more.

This can be seen as foreshadowing what?s to come later in the novel. She responds to this when Steinbeck describes her as ?bridling? ? this means to curb, or to pull herself out of that body posture. His gaze makes her feel uncomfortable, and this is an important point when assessing the character of Curley?s wife. She is actually quite an apprehensive rather than dangerous character ? she?s lonely and she feels that this kind of lustful attention is better than no attention. Again, the reoccurring theme of loneliness through the whole novel surfaces here. She?s lonely as she?s trying to exist or live in a male dominated world, where there isn?t really any place for women. She feels lonely and this is why she acts in the way shown by her entrance to the bunkhouse. ...read more.