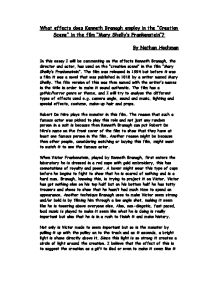 What effects does Kenneth Branagh employ in the "Creation Scene" in the film "Mary Shelly's Frankenstein"? By Nathan Hochman In this essay I will be commenting on the effects Kenneth Branagh, the director and actor, has used on the "creation scene" in the film "Mary Shelly's Frankenstein". The film was released in 1994 but before it was a film it was a novel that was published in 1818 by a writer named Mary Shelly. The film version of this was then named with the writer's names in the title in order to make it sound authentic. The film has a gothic/horror genre or theme, and I will try to analyse the different types of effects used e.g. camera angle, sound and music, lighting and special effects, costume, make-up hair and props. Robert De Niro plays the monster in this film. The reason that such a famous actor was picked to play this role and not just any random person in a suit is because then Kenneth Branagh can put Robert De Niro's name on the front cover of the film to show that they have at least one famous person in the film. Another reason might be because then other people, considering watching or buying this film, might want to watch it to see the famous actor. When Victor Frankenstein, played by Kenneth Branagh, first enters the laboratory he is dressed in a red cape with gold embroidery, this has connotations of royalty and power. ...read more.

As the eels are released into the tank they start to attack the monster at first. Then it looks like they are trying to heal him as they go for stitches to make it seem like they are repairing the monster. The first of this part is filmed using a close up, panning shot running up the monsters body, then an over the shoulder shot of the eels repairing him is employed. There is a lot in the mise en scene when Victor is standing on the tank. Victor himself standing on the tank, with the sack that held the amniotic fluid in, shaking the chains, looks to me like he has got eight hands due to the way the light is shone onto the sack. I think that if this was deliberate then it is meant to portray that he is Godlike with eight hands meaning that he is more powerful than an everyday man. The fire under the tank looks like it has been over fuelled so it is jumping up the side or even dancing. The combined effect of the fire below Victor and the electricity bolts all around emphasises him being like God standing on top of the world that he created just as victor is standing on top of the life that he created. The way those few seconds are shot is meant to give Victor and the monster all the attention of the whole screen by lighting just Victor and the tank and darkening everything else. ...read more.

While Victor is writing in his journal about what has happened in the creation, he reads it aloud so the audience at home can hear what he is writing and what he feels. This is filmed with a shot from Victor's head to his waist on the right of the mise en scene with the monster on chains in the distance. It is shot like this so as Victor is writing about the monster, we the audience, can see what he is talking about and it is also used as a reminder about what he has done. Victor, feeling sad, walks towards the curtains, which separate the laboratory from the rest of the apartment, he grabs each side of the curtain and pulls them together at the same time. The reason that Kenneth made Victor do this is to emphasise that this is the end of his research in this topic and wants to completely stop so he pulls the curtains together as happens at the end of a show or play at a theatre, to tell the audience that it has ended. The whole way through the "Creation" scene there is lots of non-diegetic music that is played that matches Victor's emotions. For example, when Victor is running through his laboratory, excited and very busy, the music is fast beat and exhilarating but when Victor realises that he has killed a life there is slow depressed music. The reason that Kenneth Branagh has chosen to do this is so that we know what Victor is feeling like at any particular point. ...read more.