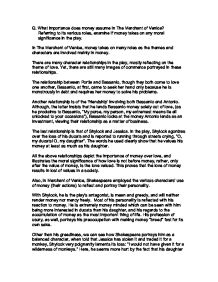 What importance does money assume in The Merchant of Venice?

Q. What importance does money assume in The Merchant of Venice? Referring to its various roles, examine if money takes on any moral significance in the play. In The Merchant of Venice, money takes on many roles as the themes and characters are involved mainly in money. There are many character relationships in the play, mostly reflecting on the theme of love. Yet, there are still many images of commerce portrayed in these relationships. The relationship between Portia and Bassanio, though they both come to love one another, Bassanio, at first, came to seek her hand only because he is monstrously in debt and requires her money to solve his problems. Another relationship is of the 'friendship' involving both Bassanio and Antonio. Although, the latter insists that he lends Bassanio money solely out of love, (as he proclaims to Bassanio, "My purse, my person, my extremest means lie all unlocked to your occasions"), Bassanio looks at the money Antonio lends as an investment, viewing their relationship as a matter of business. ...read more.

Most of his personality is reflected with his reaction to money. He is extremely money minded which can be seen with him being more interested in ducats than his daughter, and his regards to the accumulation of money as the most important thing of life. His profession of usury, as well, portrays his preoccupation with making money "breed" fast for its own sake. Other than his greediness, we can see how Shakespeare portrays him as a balanced character, when told that Jessica has stolen it and traded it for a monkey, Shylock very poignantly laments its loss: "I would not have given it for a wilderness of monkeys." Here, he seems more hurt by the fact that his daughter sold a ring that was given to him by his dead wife before they were married than he is by the loss of the ring's monetary value. ...read more.

The Christian characters discriminate against the Jews, for the former claims that Jews are only interested in money. This can be seen when Antonio rated Shylock, "about my moneys and my usances", but the Christian characters do too place importance on money, especially since, in this case, Antonio and Bassanio both go to Shylock to borrow three hundred ducats. If, the Christian characters do not care about money, there will never be the need for them to borrow. Thus, it can be said that money is the only "common" ground between the Jews and the Christians. Even if, some place more importance on money than others. At the same time, we must recognize that money is necessary and can bring security and contentment. This can be seen of Bassanio's winning of his "golden fleece" in Portia and Jessica gliding herself with Shylock's ducats reminding us that even if money cannot buy love, it can bring happiness to lovers. ...read more.