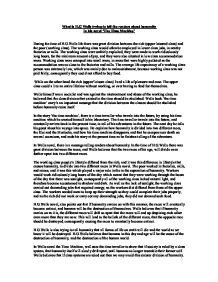 What is H.G Wells trying to tell the readers about humanityIn his novel 'The Time Machine'

What is H.G Wells trying to tell the readers about humanity In his novel 'The Time Machine' During the time of H.G.Wells life there was great division between the rich (upper leisured class) and the poor (working class). The working class would often be employed in lower class jobs, in nearby factories or mills. The working class were unfairly exploited, they were made to work ridiculously long hours, for the minimum amount of pay, and they were also situated in low class accommodation areas. Working class were cramped into small areas, in areas that were highly polluted as the accommodation was so close to the factories and mills. The average life expectancy of a working class person was extremely low, which was mainly due to malnourishment, because working class was not paid fairly; consequently they could not afford to buy food. While on the other hand the rich (upper/ leisure class) lived a life of pleasure and ease. The upper class could a live an entire lifetime without working, or ever having to fend for themselves. Wells himself was a socialist and was against the mistreatment and abuse of the working class, he believed that the class division that existed in the time should be abolished. Wells book 'the time machine' carry's an important message that the division between the classes should be abolished before humanity ruins itself. In the story 'the time machine', there is a time traveller who travels into the future, by using his time machine which he created himself in his laboratory. The time traveller travels into the future, and eventually arrives back in the present time, to tell of his adventures in the future. The next day he tells his guest about his voyage into space. He explains how humanity is divided into two different races, the Eloi and the Morlocks, and how his time machine disappears, and that he escapes near death on several occasions, and ends his story at the present time as he finishes telling of the adventure. ...read more.

These fantastic buildings that look terribly neglected were made by those of the time traveller's age, and the lack of usefulness in the eloi ensured that the buildings would never have the chance of greeting humans of intelligence ever again. 'No doubt the exquisite beauty of the buildings I saw was the outcome of the last surgings of the now purposeless energy of mankind before it settled down into perfect harmony with the conditions under which it lived'. This quote explains how the buildings were created by those of Well's time, and over the thousand of years, the evolution of humans slowly lost the intelligence or sense to maintain the beautiful buildings, and that as the eloi came to be, the buildings remained derelict. The time travellers first impression of the eloi is that they are very simple minded, and they posses nothing but basic life procedures. The time traveller is shocked to discover that the eloi are afraid of the dark, as he believes they are so simple minded they do not know of emotions, the time traveller is puzzled by the fear of the dark with these eloi's. The time traveller comes across a small ape like creature running down one of the wells; this is his first sighting of the other divided part of humanity, the morlocks. The time traveller's first impression of the morlocks is one of imperfection, he seems to think of it as a machine that is not fully operational, the time traveller describes the morlocks as 'my impression of it is, of course imperfect; but I know it was a dull white, and had strange large red eyes; also that there was the flaxen hair, on its head and down its back'. Wells explains what class the morlocks are through the time traveller. He explains of the nature of the animal and how it has adapted to its lifestyle. ...read more.

Wells is trying to create a destroyed ruined impression of the future world. He is trying to express how terrible the world could be if humanity carries on in the manner it still is. Wells is trying show the apocalypse of the world, in this terrible desolated imperfect vision. To escape the morlocks the time traveller, travels even further into the future. The world is slowly decaying, and the planets have been gathered closer to the sun by a considerable amount, the world looks destroyed and ruined. 'As the darkness thickened, the eddying flakes grew more abundant, dancing before my eyes; and the cold of the air more intense. At last one by one, one after the other, the white peaks of the distant hills vanished into blackness' the world is being destroyed before the time traveller's eyes, and he is telling his guests how eventually the world will be destroyed. Humanity and all signs of life seem to have become extinct. The time traveller does not recognise any signs of life, and notices how quiet the world seems to be. 'Beyond these lifeless sounds, the world was silent. Silent? It would be hard to convey the stillness of it all. All the sounds of man, the bleating sheep, the cries of birds, the hum of insects, the stir that makes the background of our lives, all that was over.' The human life and all other forms of life had been destroyed. The book 'The Time Machine' is a message to society rather than just a fantastic science fiction book, it carry's an important message. A class system exists today, and this class system is already causing major differences between different classes, and wells believes that if society is ruled by a class system, then humanity will divide and end up destroying itself like in the time machine. The message that this book carries is 'the class system that exists today, should be abolished before humanity ends up destroying itself and the world around it'. ...read more.