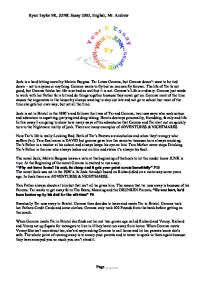 What is Junk by Melvin Burgess.

Junk is a hard hitting novel by Melvin Burgess. Tar Loves Gemma, but Gemma doesn't want to be tied down - not to anyone or anything. Gemma wants to fly but no one can fly forever. The life of Tar Is not good, but Gemma thinks her life is so bad as well but it is not. Gemma's Life is ordinary. Gemma just needs to work with her Father for a bit and do things together because they never get on. Gemma most of the time causes the arguments in the house by always wanting to stay out late and not go to school but most of the time she gets her own way, but not all the time. Junk is set in Bristol in the 1980`s and follows the lives of Tar and Gemma, two runaways who seek solace and adventure in squatting, partying and drug-taking. Heroin destroys personality, friendship, family and life. In this essay I am going to show how many ways of the adventures that Gemma and Tar start out on quickly turn to the Nightmare reality of junk. There are many examples of ADVENTURES & NIGHTMARES Now Tar's life is really Looking Bad. Both of Tar's Parents are alcoholics and when they're angry who suffers (tar). Tars Real name is DAVID but gemma gave him the name tar because he is always smoking. ...read more.

Richard is a nice and mellow person who can help when needed, well him and Vonny they were like Husband and Wife but the thing was they weren't, they were only good friends. Vonny was someone who was always feeling insecure and paranoid all the time. Vonny always asked Gemma to call home to let her parents know she was o.k. but even the phone call wasn't good enough. Vonny kept pushing it until Gemma blew and couldn't take it and was very rude. Vonny then decided that it was time for Gemma to go because she did nothing to help the flat or them. Tar even stood by their side which really annoyed Gemma but Tar couldn't speak he was so shy and jealous. Gemma then met Lily and Rob and Gemma was asked to move in their by Lily. Gemma and Lily got a job. PROSTITUTION. Gemma and Lily thought and considered it was a job, which Tar was very upset about and Rob wasn't bothered. Lily would drive near a tip and pull over in their car and have sex in the back and lily would get 50 pounds. Rob was always standing outside with a bat. One time Rob got some heroin and went. While Rob Left something was happening to Lily. Lily was attacked the guy left. Lily was strangled and hurt badly she could have died. ...read more.

When Tar would knock at Gemma's house whatever time it was Gemma's Father wouldn't let Gemma see Tar even when he came to her doorstep for help in the middle of the day. Gemma was upset and decided to run away as Tar asked her in the old estate Volvo car. Gemma didn't want to leave then but she changed her mind. The Book JUNK was a very exciting book for me to read and see how it is in some parts of the world. I have never read a whole book in my life that I really like. JUNK is the best book I have ever read. JUNK shows you what HEROIN and any other drug can do to you. JUNK showed me all the things that can happen in life. After we finished reading the book junk I was shocked to hear that the person based on Richard had died a couple years ago on a motorway. JUNK show you many life's of people who run away and cant take living at home and actually have no home. In the book JUNK there were many ADVENTURES & NIGHTMARES like when lily was strangled which was a nightmare and when they took junk which was an adventure. When Gemma and Lily were Pregnant that shocked me because I was told my friend was pregnant and I didn't know if it was true and I didn't believe it. By Ryan Joshua Taylor, 9R, English. ?? ?? ?? ?? Ryan Taylor 9R, JUNK Essay 2003, English, Mr. Andrew Page ......... ...read more.