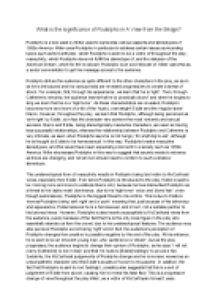 What is the significance of Rodolpho in A View from the Bridge?

Transfer-Encoding: chunked ﻿What is the significance of Rodolpho in A View from the Bridge? Rodolpho is a tool used by Miller used to symbolise various aspects and stereotypes of 1950s America. Miller uses Rodolpho in particular to address certain issues surrounding topics such as McCarthyism, which Rodolpho is seen to be a victim of throughout the play, masculinity, which Rodolpho does not fulfill the stereotype of, and the delusion of the American Dream, which for the most part, Rodolpho is an avid follower of. Miller uses this as a social commentator to get his message across to the audience. Rodolpho strikes the audience as quite different to the other characters in the play, as soon as he is introduced and his various traits are revealed progressively to create a sense of shock. For example, first, through his appearance, we learn that he is ?light?. Then, through Catherine's remarks, the audience learns that he is ?practically blond? and when he begins to sing we learn that he is a ?high tenor?. ...read more.

However, Rodolpho is also heavily susceptible to McCarthyist views from the audience, purely because of the fact that he is the only male figure in the play who essentially stands out from the crowd, due to his unstereotypical features. The audience may also perceive Rodolpho as not being ?right? and in fact, the audience?s perception of Rodolpho changes from positive to possibly negative by the end of the play. At his entrance, he is seen to be an innocent young man, who wants to be a ?citizen?, but as the play progresses, the audience begins to change their opinion of Rodolpho, as he says ?I will not marry [Catherine] to live in Italy? and that ?he nods to [Eddie] testingly? to provoke him. Suddenly, the McCarthyist judgements of Rodolpho change and he is moreso viewed as an unsympathetic character who fills Eddie?s doubts of ?bowin? to his papers?. In addition, the fact that Rodolpho is said to nod ?testingly?, possibly also suggests that this is a sort of judgement of Eddie from above, causing him to reveal his fatal flaw. ...read more.

The fact that Rodolpho becomes more focused on the requirement for work and earning money compared to his initial desires of living the American Dream, shows that he is possibly maturing as the play goes on and that he is possibly also becoming more confident in his ability to stay in America as a citizen. Miller, whose family suddenly became poor during the Wall Street Crash, knows the realities of the American Dream, and uses Rodolpho?s effects on Eddie as a tool to showcase the consequences of blindly following the American Dream, and doing everything you can to achieve it. Overall, the significance of Rodolpho in A View from the Bridge is that he is used by Miller to portray the need for society to accept that times are changing, and to not persecute people due to whether or not they fulfill a stereotype. Rodolpho is also used by Miller to display the consequences of McCarthyism and prejudice, and furthermore, he is used by Miller to signify the consequences of following a delusion such as the American Dream, and of being in denial of the fact that it doesn't exist. ...read more.