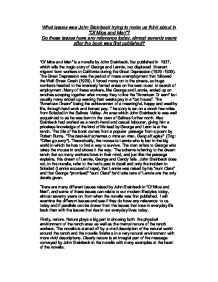 What issues was John Steinbeck trying to make us think about in &quot;Of Mice and Men&quot;? Do these issues have any relevance today, almost seventy years after the book was first published?

What issues was John Steinbeck trying to make us think about in "Of Mice and Men"? Do these issues have any relevance today, almost seventy years after the book was first published? "Of Mice and Men" is a novella by John Steinbeck, first published in 1937, which tells the tragic story of George and Lennie, two displaced itinerant migrant farm workers in California during the Great Depression (1929-1939). The Great Depression was the period of mass unemployment that followed the Wall Street Crash (1929), it forced many on to the streets, so huge numbers headed to the intensely famed areas on the west coast in search of employment. Many of these workers, like George and Lennie, ended up on ranches scraping together what money they to live the "American Dream" but usually many ended up wasting their weeks pay in a "cat house". The "American Dream" being the achievement of a meaningful, happy and wealthy life, through hard work and honest pay. The story is set on a ranch few miles from Soledad in the Salinas Valley. An area which John Steinbeck is was well acquainted to as he was born in the town of Salinas further north. Also Steinbeck had worked as a ranch-hand and casual labourer, giving him a priceless knowledge of the kind of life lead by George and Lennie at the ranch. The title of the book comes from a popular passage from a poem by Robert Burns. "The best-laid schemes o mice an men, Gang aft agley" (Eng: "Often go awry"). ...read more.

"George gonna say I done a bad thing. He ain't gonna let me tend no rabbits". It is a powerful dream (dream ranch) and even the cynical Crooks falls under its spell for a short time. Crooks however dreams of when he was young, on his father's chicken ranch, a time when he was not racially discriminated against, white and black kids played together and he was happy. The complete opposite of his situation now. He is racially discriminated against, has neither friends nor family and is bitter because of it. So he uses his dreams and memories to escape the harshness of reality. Curley's wife is another who has dreams, her fantasies of a part in the "pitchers" and a luxury lifestyle. She dreams of being rich and famous, part of her dissatisfaction with life is that her dreams can never measure up to her life. She also uses her dreams to escape the harshness of reality. She blames every one but herself for why her dreams have not materialised and become a reality. Significantly, none of these characters achieve their dreams and in a few cases they cause grave problems. This issue does have relevance to us today as most people still have dreams and aspirations and many people's lives are influenced by their dreams, in both a positive and negative way. Many people still use dreams to escape from reality just like Curley's wife and Crooks. John Steinbeck probably tried to show the consequences of living in dreams rather than in reality, in what happened to Curley's wife (sad, lonely and died trying to get some attention) ...read more.

Ironically this is what Curley's wife is attracted to. Probably the most violent scene is Lennie's death. George decides to shoot Lennie himself because earlier on when Candy's dog was killed he tells George he wished he had done it himself. Also George shoots him in the back of the head because that is the way Carlson described to be the least painful way before killing Candy's dog. It is the threat of uncontrollable violence Lennie posed as the reason to why he had to be killed in the end. This issue of violence also has great importance seventy years on. Violence has always existed in communities across the world. Parallels can be drawn from the violence in the book. For example, euthanasia, Lennie and Candy's dog where killed because they had some sort of medical condition causing problems for themselves or people around them. Just like in many countries today euthanasia takes place, maybe in a more humane way but the ideology behind it are the same. Maybe Steinbeck was trying to convey the message that euthanasia is no better than putting down a dog. When Lennie and Curley fight none of the ranch workers present tried to stop the fight in anyway until great damage had been caused. The same reluctance is shown today. However the violence back then was largely un-policed and on a larger scale. In conclusion, there are four main issues raised by john Steinbeck in his novella "Of Mice and Men". Loneliness, Nature, Violence and Dreams. All of these have a certain relevance to our lives today almost seventy years on. But some more than others, as even though the times have changed human nature has not. ...read more.