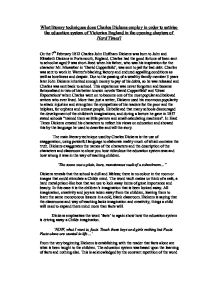 What literary techniques does Charles Dickens employ in order to satirise the education system of Victorian England in the opening chapters of Hard Times?

What literary techniques does Charles Dickens employ in order to satirise the education system of Victorian England in the opening chapters of Hard Times? On the 7th February 1812 Charles John Huffham Dickens was born to John and Elizabeth Dickens in Portsmouth, England. Charles had the good fortune of been sent to school at aged 9 was short-lived when his father, who was his inspiration for the character Mr. Micawber in 'David Copperfeild', was sent to jail for bad debt. Charles was sent to work in Warren's blacking factory and endured appalling conditions as well as loneliness and despair. Due to the passing of a wealthy family member 3 years later John Dickens inherited enough money to pay of his debts, so he was released and Charles was sent back to school. This experience was never forgotten and became fictionalised in two of his better-known novels 'David Copperfield' and 'Great Expectations' when Charles went on to become one of the most popular and beloved writers who ever lived. More than just a writer, Dickens used his enormous popularity to attack injustice and strengthen the sympathies of his readers for the poor and the helpless, for orphans and outcast people. He believed that many schools discouraged the development of the children's imaginations, and during a lecture he gave in 1857 stated schools "trained them as little parrots and small calculating machines". ...read more.

Now obviously the teacher is not an actual square but Dickens emphasizing the squareness of his body is another way in witch he is mocking the whole way of teaching. The teacher is talking about facts and the square itself is a fact. Something is either a square or not a square. You can't be imaginative and have a 5 sided square, or you can't have a square with one side longer than the other as it will be no longer a square, so it's no longer a fact. A square is exact, just like a fact. The teacher has no imagination and is exact in the way of his teaching of facts, the way in witch millions of other teachers would have been taught. The way Dickens describes the characters with metaphors is a way of expressing his views on the system. 'He seemed a galvanising apparatus to...' A galvanising machine uses electric shock therapy to erase parts of people's memories. It is a horrible and extremely painful form of torture. Dickens is telling us that the teachers are trying to wipe these children clean, turning them blank so that they can be re-written with facts. Saying that the lessons are a form of torture is again using exaggeration, but there is truth behind it as well as they are attempting to clear the children's mind of everything but pure facts. ...read more.

'Imperial gallons of facts poured into them until they were full to the brim...looking into all the vessels before him, one after another, to see what they contained...' Dickens uses this allusion to show that the school was like a jail where you were forced to learn all these facts until you were fill to the brim. The children are been filled with facts in order to drive out any imagination they have left. Dickens also tells us of the consequences that the children may face if they continue with this teaching regime. To conclude, in the opening chapters of Hard Times Charles dickens has satirised the education system by creating an exaggerated allusion of the way of teaching, almost to a point of ridicule but at the same time exposing the truth behind the education. This leads us, the readers, to believe that the system is wrong and inhumane to children. This is because they are suppressing the Childs imagination, a thing of great importance and opportunity. However Hard Times was written to humour the Victorians, but Dickens still manages to express his opinion and change the readers opinion, to feel the education system is doing unjust to the children in lacking major parts of a Childs mental development and not letting them reach there full prudential. ...read more.