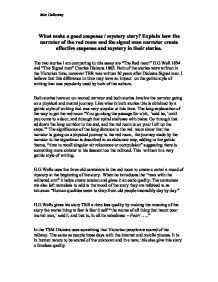 What make a good suspense / mystery story? Explain how the narrator of the red room and the signal man narrator create effective suspense and mystery in their stories.

What make a good suspense / mystery story? Explain how the narrator of the red room and the signal man narrator create effective suspense and mystery in their stories. The two stories I am comparing in this essay are "The Red room" H.G Well 1894 and "The Signal man" Charles Dickens 1865. Both of the stories were written in the Victorian time, however TRR was written 30 years after Dickens Signal man. I believe that this difference in time may have an impact on the gothic style of writing that was popularly used by both of the authors. Both stories have an un-named narrator and both stories involve the narrator going on a physical and mental journey. Like wise in both stories this is obtained by a gothic style of writing that was very popular at this time. The long explanation of the way to get the red room "You go along the passage for a bit, 'said he, 'until you come to a door, and through that spiral staircase with baize. ...read more.

The caretakers are also left nameless to add to the mood of the story they are refereed to as inhuman "Human qualities seem to drop from old people insensibly day by day." H.G Wells gives his story TRR a time less quality by making the meaning of the story the worse thing to fear is fear it self "the worse of all thing that haunt poor mortal man,' said I; and that is, in all its nakedness - Fear! ....." In the TSM Dickens uses something that Victorian people are scared of the railway. The same as people these days with the internet and mobile phones. It is in human nature to be scared of the unknown and the new, this also give this story a timeless quality. Dickens and H.G Wells both use language to create a mood. An example of this in TRR is the narrator describing the corridor lending to the empty, cold and old feeling "The long draughty subterranean passage was chilly and dusty This is made the repetition of certain word, simile, and metaphors. ...read more.

The time that the story was written had a great influence on both of the stories many more people were exploring places to go and what they could do. And a lot more people had extra money than what they had ever had before, and the middle class was growing because of the industrial revolution. I feel TSM is a story that tries to reflect the 19th century society. As advances in technology came about as did the denial of ghosts. The signalman was never out in sunlight and was "Alienated" from his environment The end of both stories leave you wondering about what fear can do to a person they both after no solution which makes them true mystery stories. I do prefer TSM because I found it engaged the reader more as you go on a journey with the narrator. It had a more compelling storyline and felt the foundation of the story was more original then TRR Jake Galloway ...read more.