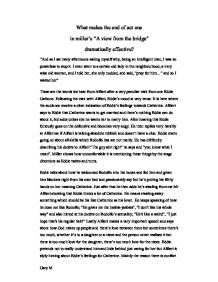 What makes the end of act one in miller's &quot;A view from the bridge' dramatically effective?

What makes the end of act one in miller's "A view from the bridge" dramatically effective? "And as I sat many afternoons asking myself why, being an intelligent man, I was so powerless to stop it. I even went to a certain old lady in the neighbourhood, a very wise old woman, and I told her, she only nodded, and said, "pray for him..." and so I waited her" These are the words we hear from Alfieri after a very peculiar visit from one Eddie Carbone. Following the visit with Alfieri, Eddie's mood is very tense. It is here where the audience receive a clear indication of Eddie's feelings towards Catherine. Alfieri says to Eddie that Catherine wants to get married and there's nothing Eddie can do about it, but adds unless she he wants her to marry him. After hearing this Eddie furiously goes on the defensive and becomes very edgy. He then replies very harshly at Alfieri as if Alfieri is talking absolute rubbish and doesn't have a clue. Eddie starts going on about all skills which Rodolfo has are not manly. He has difficulty describing his doubts to Alfieri "The guy aint right" he says and "you know what I mean". Miller shows how uncomfortable it is mentioning these things by the stage directions as Eddie twists and turns. Eddie talks about how he welcomed Rodolfo into his house and fed him and given him blankets right from his own bed and passionately say but he's putting his filthy hands on her meaning Catherine. ...read more.

Marco is supposed to be a tall, strong man, who also keeps himself to himself. Marco, also, was thinking about his family the whole time he was in America, in fact the only reason why he came to America was, to make some money and to send it home to his family. These are all the looks and qualities that Eddie implies that a man needs. Finally, Marco is a lot more mature than Rodolfo is; this is another quality that a man needs according to Eddie. Marco thinks about his actions and what it will do, but the problem is that Marco also shows his feelings in what he does not what he says, so this causes conflict between Marco and Eddie because they find it hard to communicate with each over. This lack of talking how he feels causes problems between the two men because they do not understand each other, when you don't talk to someone or tell them your feelings than its hard to know what they are like and how they feel. For example when Marco lifts the chair at the end of act one, Eddie felt that Marco was threatening him but Marco was only trying to warn and remind Eddie that Rodolfo has a brother. In all of this Miller makes Beatrice out to being the peacemaker in every situation. Every time tensions are getting high she seems to cool everyone down by changing the subject. ...read more.

Everything is going well. Eddie asks Rodolfo to hit him and after Eddie says he's going to hit Rodolfo but in a friendly way. So Eddie hits him hard. He alone knows that he has got his revenge from Rodolfo dancing with Catherine. Everyone is wondering whether Rodolfo is ok and Rodolfo trying to seem manly in front of Catherine says yes he's fine he was just surprised. Everyone else falls for it. This was a way of Eddie getting his anger out, also showing Rodolfo that he wants respect from him. This again is Physical like most of the key moments in Millers play. Mainly the intension had been to seem a bigger man than Rodolfo! Lastly and this is the most important section which makes the end of act one dramatically effective. Is the scene where Marco asks Eddie to lift a chair with one hand and Eddie can't, but Marco can. Everyone has fallen for Eddie's punch on Rodolfo as being merely friendly except Marco who realises there was a deeper intension. He then confronts Eddie this way showing him that he is stronger than him; mainly that he will defend his brother anytime he needs to. So Eddie should watch what he does. This is the second Confrontation between Eddie and Marco. Miller also wanted this to leave a cliff-hanger to make audiences or reader want to continue reading or come back and watch the rest of the play. This also makes you think about what happens in the play a lot more. Once again it is physical showing that most of the play is based on physical activities. Gary M ...read more.