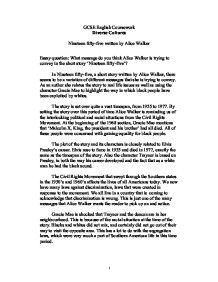 What message do you think Alice Walker is trying to convey in the short story 'Nineteen fifty-five'?

GCSE English Coursework Diverse Cultures Nineteen fifty-five written by Alice Walker Essay question: What message do you think Alice Walker is trying to convey in the short story 'Nineteen fifty-five'? In Nineteen fifty-five, a short story written by Alice Walker, there seems to be a variation of different messages that she is trying to convey. As an author she relates the story to real life issues as well as using the character Gracie Mae to highlight the way in which black people have been exploited by whites. The story is set over quite a vast timespan, from 1955 to 1977. By setting the story over this period of time Alice Walker is reminding us of the interlocking political and racial situations from the Civil Rights Movement. At the beginning of the 1968 section, Gracie Mae mentions that 'Malcolm X, King, the president and his brother' had all died. All of these people were concerned with gaining equality for black people. The plot of the story and its characters is closely related to Elvis Presley's career. Elvis rose to fame in 1955 and died in 1977, exactly the same as the timespan of the story. Also the character Traynor is based on Presley, in both the way his career developed and the fact that as a white man he had the black sound. ...read more.

This is because she is a black woman. However, although Traynor is able to make money from the song he never fully understands what it is about. This is because it has not come from his own thoughts and feelings. When Gracie Mae wrote the song it was all based on her own personal experiences in life, and so she could be the only one who would ever be able to relate fully to it. The basic moral that Alice Walker is trying to point out here is that you must live your own life and not that of someone else's as that is like living a lie. Traynor continually showers Gracie Mae with gifts, throughout his career and lifetime. I believe this is because he feels guilty. Guilty, that he has come to fame using her song and how she never managed to get people listening to her, just because of the colour of her skin. Gracie Mae writes letters to Traynor, while he is serving in the army at Germany. In one she mentions the car he brought her at Christmas and how she does 'appreciate the mink and the new self-cleaning oven' and that she had 'more than enough of everything.' These are just a couple of the many gifts brought for her through guilt. ...read more.

I think by doing this Alice Walker is trying to prove that not everyone fits into a category or stereotype. During the last three lines of the story Gracie Mae says ' But I didn't want to see 'em. They was crying and crying and didn't even know what they was crying for. One day this is going to be a pitiful country, I thought.' I think this means that she feels pity for them because they feel emotion but they do not know why they are feeling it, she also feels that in time the whole of the country will be like this with everybody's lives. This also shows that the exploitation of another race's genius will lead to emptiness and lack of fulfilment. So to answer the question what message do I think Alice Walker is trying to convey in Nineteen fifty-five is extremely difficult as you can see she manages to include so many views and points in such a short piece of text. However some of the main ones are not to live a lie, racial prejudice and how it is wrong, but finally most important of all every one no matter what differences race, sex or anything else should be treated equal. By Nicole Faulks 3 1 ...read more.