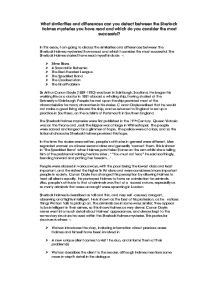 What similarities and differences can you detect between the Sherlock Holmes mysteries you have read and which do you consider the most successful?

What similarities and differences can you detect between the Sherlock Holmes mysteries you have read and which do you consider the most successful?

Sir Arthur Conan Doyle (1859-1930) was born in Edinburgh, Scotland. He began his working life as a doctor in 1881 aboard a whaling ship, having studied at the University of Edinburgh. People he met upon the ship provided most of the characteristics for many characters in his stories. Conan Doyle realised that he would not make a good living aboard the ship, and so returned to England to set up a practice in Southsea, on the outskirts of Portsmouth in Southern England.

The Sherlock Holmes mysteries were first published in the 19th Century.  Queen Victoria was on the throne and Jack The Ripper was at large in Whitechapel.  The people were scared and longed for a glimmer of hope.  The police were at a loss, and so the fictional character Sherlock Holmes provided this hope.

In the time the stories were written, people’s attitudes in general were different. Men regarded women as a lower second class and generally ‘owned’ them. This is shown in ‘The Speckled Band’ when Holmes pats Helen Stoner on the arm whilst she is telling him of the problem involving her late sister, ‘ “You must not fear,” he said soothingly, bending forward and patting her forearm…’.

People were classed in various ways, with the poor being the lowest class and least important, and the richest the higher fir9st class and were considered more important people in society. Conan Doyle has changed this perception by allowing Holmes to treat all clients equally. He portrayed Holmes to have an admiration for criminals. Also, people’s attitude to that of criminals was that of a scared nature, especially as so many criminals that were uncaught were operating in London.

Sherlock Holmes is described as tall and thin, and very self-assured, arrogant, observing and highly intelligent. He is shown as the best of his profession, as he notices things Watson fails to pick up on. The criminals are in some ways similar; they appear to be intelligent in their crimes, so this shows Holmes as very clever. Conan Doyle never went into much detail about Holmes’ appearance, and always kept to the same story structure he used within the Sherlock Holmes mysteries. This particular structure is where –:

Tradition is broken on ‘The Final Problem’, because Conan Doyle was hoping to end writing the mysteries on this particular story. He wanted to end the Holmes saga on something different , and which would be remembered. The differences in this mystery include -:

Conan Doyle used Watson as the narrator for the mysteries. This worked because Watson did not notice some of the clues Holmes did, allowing Holmes to solve the mystery at the end (with clues Watson did not pick up on). This portrayed Holmes as a genius, and therefore smarter than Watson and the audience.

Because Watson was Holmes’ sidekick, he went to the scene of the crime as well as Holmes, so there would be less difference if Holmes himself narrated the stories, however, there would be much more detail and the clues would be pieced together faster had Holmes narrated. The fact that Watson didn’t describe himself made the audience feel they were actually there investigating with Holmes, the audience, in effect, were seeing everything through Watson’s eyes. To make sure the audience did not get lost, Watson often recapped the developments throughout the story.

Key clues in each story could easily have been missed out because of this, as shown in ‘The Red-Headed League’ when both characters were separated.

Conan Doyle’s use of language in the Sherlock Holmes mysteries is used to interest the reader. There is a lot of dialogue between Holmes and Watson because Conan Doyle wants the reader to understand Holmes’ true genius ability, by asking him questions about the location, and also the final conclusion at the end, when Holmes explains everything to Watson. This has to be in dialogue otherwise there would be no other way for Conan Doyle to explain the solutions to the mysteries.

The main similarities between the Sherlock Holmes mysteries I have detected are that Sir Arthur Conan Doyle uses a similar story structure in the mysteries, where in every new mystery a new unique client comes to visit Watson and Holmes and explain their problem(s) at 211B Baker Street, Holmes and Watson both visit the locations together, they then set the trap for the villain, the villain is caught, Holmes explains the solution to the mystery and the story ends.

The main differences between the mysteries I have detected are that a new victim comes to visit Holmes and Watson in every mystery, and the recognisable differences between the mysteries happen in ‘The Final Problem’, in which there is no client, there is no mystery to solve, Holmes himself has the problem, Holmes visits Watson at Watson’s residence, rather than Holmes’ residence,  Holmes himself is a victim in this story, the story mostly takes place out of London, in Europe.

So, in hindsight, the Sherlock Holmes mysteries do indeed share similarities, including the story structure. However, there are clearly some major differences that set each story aside and make each distinct.