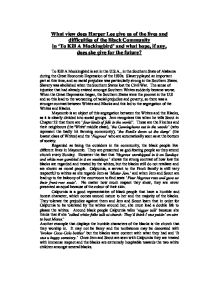 What view does Harper Lee give us of the lives and difficulties of the Black Community in &amp;#145;To Kill A Mockingbird&amp;#146; and what hope, if any, does she give for the future?

What view does Harper Lee give us of the lives and difficulties of the Black Community in 'To Kill A Mockingbird' and what hope, if any, does she give for the future? To Kill A Mockingbird is set in the U.S.A., in the Southern State of Alabama during the Great Economic Depression of the 1930s. Slavery played an important part at this time, and so racial prejudice was particularly strong in the Southern States. Slavery was abolished when the Southern States lost the Civil War. The sense of injustice that had already existed amongst Southern Whites suddenly became worse. When the Great Depression began, the Southern States were the poorest in the U.S and so this lead to the worsening of racial prejudice and poverty, so there was a stronger contrast between Whites and Blacks and this led to the segregation of the Whites and Blacks. Maycomb is an object of this segregation between the Whites and the Blacks, as it is clearly divided into social groups. Jem recognises this when he tells Scout in Chapter 23 that there are ' four kinds of folk in the world'. These are the Finches and their neighbours (the 'White' middle class), 'the Cunninghams out in the woods' (who represent the badly hit farming community), 'the Ewells down at the dump' (the lowest class of Whites) and the 'Negroes' who are automatically seen as at the bottom of society. Regarded as being the outsiders in the community, the black people live different lives in Maycomb. They are presented as god-fearing people as they attend church every Sunday. However the fact that 'Negroes worshipped in it on Sundays and white men gambled in it on weekdays.' shows the strong contrast of how low the blacks are regarded and treated by the whites, but the blacks still do not retaliate and are shown as moral people. Calpurnia, a servant to the Finch family is still very respectful to whites as she regards Jem as 'Mister Jem.' ...read more.

It is easy to see that the "Mockingbird" in this story is Tom Robinson- a harmless man who becomes a victim of racial prejudice. Like the Mockingbird, Tom has never done wrong to anyone. Tom Robinson is the subject of racial prejudice and portrays the difficulties of the lives of the blacks, as they have no chance of winning the court case, only because of the colour of his skin. Every person in Maycomb knew that Atticus would never win Tom Robinson's case. ' You've got everything to lose from this Atticus. I mean everything.' Before the trial, Maycomb town was informed that 'the court appointed him to defend this nigger' and because of the hate, which was felt towards black people by the majority of the Maycomb citizens, Atticus, Jem and Scout drew attention to themselves. This caused the majority of the Maycomb citizens to bother and harass them as they were attempting to befriend the black people. 'Yeah, but Atticus aims to defend him. That's what I don't like about it.' The extent of this prejudice towards the blacks is shown when Scout receives comments from the children at her school like Cecil Jacobs. 'Cecil Jacobs made me forget. He had announced in the school yard the day before that Scout Finch's daddy defended niggers.' Cecil Jacobs is a perfect example of the younger generation of Maycomb that had already been brainwashed by their parents to be prejudiced against black people. This makes the lives of the blacks more difficult as this prejudice is being passed down onto generations so they can never avoid it. ' My folks said your daddy was a disgrace an' that nigger oughta hang from the water-tank!' Jem's view on the extent of prejudice towards the blacks is a contrast to that of Cecil Jacobs as he has already been taught by Atticus that black people are just as equal. ...read more.

Hope for the future is also seen through people who care, such as Miss Maudie, Link Deas and Atticus. Link Deas gives his support to Tom as he voiced his opinion in the courtroom. 'I just want the whole lot of you to know one thing right now. That boy's worked for me eight years an' I ain't had a speck o'trouble outa him. Not a speck.' More evidence to show hope for the future is the amount of time Atticus kept the Jury out for. If Atticus hadn't made a speech so powerful and effective, telling the Jury that they everyone knew who would win because the 'case was as simple as black and white.' The court case would have been ended shortly. 'If we'd had two of that crowd, we'd've had a hung jury.' Even Miss Maudie explains this to the children. 'Atticus Finch won't win, he can't win, but he's the only man in these parts who can keep a jury out so long in a case like that.' Despite the fact that Tom Robinson lost the case, Atticus is hardly upset, as he knew that this would be the result. The children were confused about Atticus' reaction but Miss Maudie soon explains it. '...we're making a step - it's just a baby-step, but it's a step.' 'Baby steps' like this provide a definite hope for the future and the children realise the cruelty the blacks are subjected to. Finally Harper Lee uses Atticus' simple saying which helps Scout to understand prejudice. From this statement it is saying that if every parent was like Atticus and taught their children the cruelty of prejudice against the blacks then prejudice can be rid of. Atticus explains that by standing in someone else's shoes, you learn to see things from their point of view and as a result you will understand and tolerate them, and no longer be prejudiced against them. 'You never really understand a person until you consider things from his point of view:-until you climb into his skin and walk around in it.' ...read more.