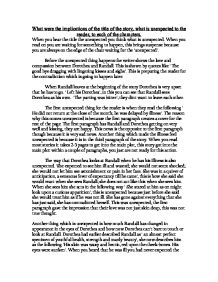 What were the implications of the title of the story, what is unexpected to the reader, to each of the characters.

What were the implications of the title of the story, what is unexpected to the reader, to each of the characters. When you hear the title the unexpected you think what is unexpected. When you read on you are waiting for something to happen, this brings suspense because you are always on the edge of the chair waiting for the 'unexpected'. Before the unexpected thing happens the writer shows the love and compassion between Dorothea and Randall. This is shown by quotes like ' The good bye dragging with lingering kisses and sighs'. This is preparing the reader for the contradiction which is going to happen later. When Randall leaves at the beginning of the story Dorothea is very upset that he has to go. ' Left his Dorothea', in this you can see that Randall sees Dorothea as his own. 'The parting was bitter', they dint want to leave each other. The first unexpected thing for the reader is when they read the following ' He did not return at the close of the month; he was delayed by illness'. ...read more.

She has gone against everything that she has just said, she has contradicted herself. This was unexpected, the first paragraph gave the impression that their love was not just skin deap, this was not true thought. Another thing which is unexpected is how much Randall has changed in appearance in the eyes of Dorothea and how now Dorothea can't bare to touch or look at Randall. Dorothea had earlier described Randall as ' an almost perfect specimen of youthful health, strength and manly beauty', she now describes him as the following 'His skin was waxy and hectic, red upon the cheek-bones. His eyes were sunken'. When you heard that he was ill you had never expected the illness to have this affect. Reader the second quote makes you feel you sick, when you imagine what he looks like you think that he must now be very ugly and disgusting. I think that Dorothea had not expected the illness to take this large affect on him. She cannot even bare to touch him now. 'At the sight and the touch of him something within seemed to be shuddering'. ...read more.

She no longer wants to marry him because his looks have changed. Dorothea sees it later on in the story as if she is fleeing death. Death is a metaphor Randall. She now in her mind sees him as an illness which is trying to get her. Her views are now so different than what they were are the beginning of the story. When Dorothea says that she does not really want to marry Randall, Randall gives a nice incentive to Dorothea is she marries him. This is that he will let her have all his money and posentions if he dies (which is quite probobal). This is a piece of black mail. When she thinks about this offer her response is ' Never! She whispered not for all his thousands! Never never! Not for millions' The way I interoperated this is that when she says never for millions, that in fact she is considering it. She is thinking that she may marry him for his millions. This is the big ending, you dint expect this one coming. I think that ever Dorothea is shocked with herself, how she is considering it. She cannot bare to say it out loud so she whispers it. ...read more.