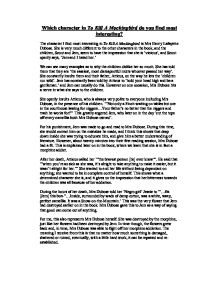 Which character in To Kill A Mockingbird do you find most interesting?

Which character in To Kill A Mockingbird do you find most interesting? The character I find most interesting in To Kill A Mockingbird is Mrs Henry Lafayette Dubose. She is very much different to the other characters in the book, and the children, Scout and Jem, seem to have the impression that she is 'vicious', and Scout openly says, 'Jem and I hated her.' We can see many examples as to why the children dislike her so much. She has told them that they are 'the sassiest, most disrespectful mutts whoever passed her way'. She constantly insults them and their father, Atticus, on the way he lets the 'children run wild'. Jem has constantly been told by Atticus to 'hold your head high and be a gentleman.' and Jem can usually do this. However on one occasion, Mrs Dubose hits a nerve in what she says to the children. ...read more.

After her death, Atticus called her '"the bravest person [he] ever knew'". He said that '"when you're as sick as she was, it's alright to take anything to make it easier, but it wasn't alright for her.'" She wanted to end her life without being dependant on anything; she wanted to be in complete control of herself. This shows what a determined character she is, and it gives us the impression that her bitterness towards the children was all because of her addiction. During the hours of her death, Mrs Dubose told her 'Negro girl' Jessie to '"...fix [Jem] this box-"...Inside, surrounded by wads of damp cotton, was a white, waxy, perfect camellia. It was a Snow-on-the-Mountain.' This was the very flower that Jem had destroyed earlier on in the book. Mrs Dubose gave this to Jem as a way of saying that good can come out of anything. ...read more.

Mrs Dubose however is a woman who they plainly hate, and who intimidates them at every opportunity. Mrs Dubose can be described as one of the minor mockingbirds in the novel. We are told, by Miss Maudie, that '"Mockingbirds don't do one thing but make music for us to enjoy."' Although Mrs Dubose does not make Jem and Scout's lives easier, she is still suffering from an addiction that must be hell for her to go through. We see many examples of Mrs Dubose being bitter, but she is also good-natured about Jem and Scout's mother and Atticus' late wife, saying 'A lovelier lady than our mother never lived.' Through this we can see that deep down inside Mrs Dubose is not sour towards everybody. I have stated my points about Mrs Dubose being an interesting character in the above. I believe that her character does not come through very solidly until the end of the first part of the book; at her strongest she is at death's door. ...read more.