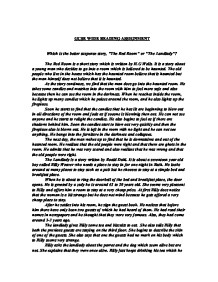 Which is the better suspense story, &quot;The Red Room&quot; or &quot;The Landlady&quot;?

GCSE WIDE READING ASSIGNMENT Which is the better suspense story, "The Red Room" or "The Landlady"? The Red Room is a short story which is written by H.G Wells. It is a story about a young man who decides to go into a room which is believed to be haunted. The old people who live in the house which has the haunted room believe that is haunted but the man himself does not believe that it is haunted. As the story continues, we find that the man does go into the haunted room. He takes some candles and matches into the room with him to feel more safe and also because then he can see the room in the darkness. When he reaches inside the room, he lights up many candles which he palces around the room, and he also lights up the fireplace. Soon he starts to find that the candles that he has lit are beginning to blow out in all directions of the room and feels as if soeone is blowinig then out. ...read more.

When he is about to ring the doorbell of the bed and breakfast place, the door opens. He is greeted by a ;ady ho is around 45 to 50 years old. She seems very pleasent to Billy and offers him a room to stay at a very cheap price. At first Billy does notice that the woman is a bit strange but he does not mind because he gets offered a very cheap place to stay. After he settles into his room, he sign the guest book. He notices that before him there have only been two guests of which he had heard of them. He had read their names in newspapers and he thought that they were very famous. Also, they had come around 2-3 years ago. The landlady gives Billy some tea and biscuits to eat. She also tells Billy that both the previous guests are staying on the third floor. She begins to describe the skin of one of the guests. ...read more.

The narrator reveals his character in the first paragraph when he says "it will take a very tangible ghost to frighten me ". This shows the narrator as being an arrogant, big headeaded and also brave. I think that the slow beginning builds up the tension of the story. The reader is more aware of what is happeninig and also able to predict what is going to happen next in the story. However, the story "The Landlady" begins with narrator of the story describing the weather and the main character. The narrator describes the setting of the story as being a very cold, dark winter night. "The air was deadly cold and the wind was like a flat blade of ice on his cheeks" The narrator also describes the main character, Billy Weaver as being a teenager all alone in Bath. Also, as Billy walks around the town, the narrator describes as being deserted. "There were no shops on this wide street". This also builds up the tension of the story. The Landlady, has a smaller, less completecated and confusing opening which keeps the reader following the story and does not confuse or bore it. ...read more.