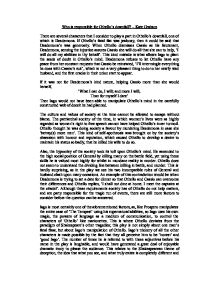 Who is responsible for Othello's downfall?

Who is responsible for Othello's downfall? - Kate Graham There are several characters that I consider to play a part in Othello's downfall, one of which is Desdemona. If Othello's fatal flat was jealousy, then it could be said that Desdemona's was generosity. When Othello dismisses Cassio as his lieutenant, Desdemona, sensing the injustice assures Cassio she will do all that she can to help, 'I will do all my abilities in thy behalf'. This kind mistake is what allows Iago to plant the seeds of doubt in Othello's mind. Desdemona refuses to let Othello have any peace from her constant requests that Cassio be reinstated, 'I'll intermingle everything he does with Cassio's suit', which is not a very pleasant thing to do to her newly wed husband, and the first cracks in their union start to appear. If it was not for Desdemona's kind nature, helping Cassio more than she would herself, 'What I can do, I will; and more I will, Than for myself I dare' Then Iago would not have been able to manipulate Othello's mind in the carefully constructed web of deceit he had planned. The culture and values of society at the time cannot be allowed to escape without blame. ...read more.

Iago's trickery of all the other characters is made possible by the fact that they all perceive him to be 'honest' and 'good Iago'. The number of times he is referred to with these adjectives before his name in the play is laughable, and would have generated a great deal of enjoyable dramatic irony to please the audience. This relates to the Shakespearean theme of deception, the idea that what you see, and what truly exists is completely different and often totally unrelated to each other. This again links with the society at the time's obsession with reputation. Nobody mistrusts Iago because of his impeccable appearance and social status, and nobody attempts to look any deeper beyond this. Samuel Coleridge said 'Shakespeare presents a being close to the devil, with motiveless malignity'. This can be argued against, as Iago does give the audience some flimsy excuses for his plot, however I do not believe these are his true reasons for the destruction of Othello. Without Iago's constant disguised manipulation, the General's mind would not have started its journey down the path of jealousy. One critic who disagrees with this view is FR Leavis. ...read more.

He claims Othello is the 'most romantic figure among Shakespeare's heroes.... He does not belong to this world'. In the literary sense of the word romantic Othello is incredibly apt. Romanticism is all about extremes of emotion, the emotional triumphing over the rational and can often be quite self-obsessed, as is Othello. Bradley would argue that Iago is completely responsible for Othello's downfall, as the General is too passionate and trusting for this world, which I interpreted to mean he could not function correctly in it. This view is partly reasonable, as without Iago's calculating skill, Othello's downfall may never have taken place. William Hazlett describes Iago as an 'aesthete evil, a traditional Machiavellian' and a personification of rationality. This description enables the reader to view the outcome of the play as rationality's win over emotion, however as the idea of romanticism and rationality versus emotion did not develop in literary criticism until the eighteenth century, caution must be used when applying these values to a text written before them. In answering the question, Iago's role in the tragedy cannot be underestimated, however, Othello's mind being so open to direction from others poses the unanswerable question, would these events have unfolded anyways, without Iago's presence? Iago was partly responsible, but the main fault lies in Othello's mistrust of his wife and inability to dismiss idle scandal for what it really is. ...read more.