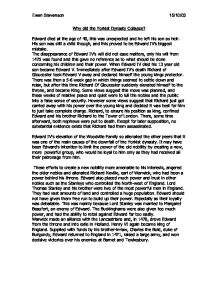 Why did the Yorkist Dynasty Collapse?

Why did the Yorkist Dynasty Collapse? Edward died at the age of 40, this was unexpected and he left his son as heir. His son was still a child though, and this proved to be Edward IV's biggest mistake. The disappearance of Edward IV's will did not ease matters, only his will from 1475 was found and this gave no reference as to what should be done concerning his children and their power. When Edward IV died his 13 year old son became Edward V. Immediately after Edward IV's death Richard of Gloucester took Edward V away and declared himself the young kings protector. There was then a 5-6 week gap in which things seemed to settle down and relax, but after this time Richard Of Gloucester suddenly elevated himself to the throne, and became King. ...read more.

These efforts to create a new nobility more amenable to his interests, angered the older nobles and alienated Richard Neville, earl of Warwick, who had been a power behind his throne. Edward also placed much power and trust in other nobles such as the Stanleys who controlled the North-west of England. Lord Thomas Stanley and his brother were two of the most powerful men in England. They had vast amounts of land and controlled a huge population. Edward should not have given them free run to build up their power. Especially as their loyalty was debatable. This was mainly because Lord Stanley was married to Margaret Beaufort, an enemy of Edward. The Buckinghams were also given too much power, and had the ability to rebel against Edward far too easily. ...read more.

Parliament then declared that Richard was the rightful king, on the grounds that the marriage of Edward IV with Elizabeth Woodville had been illegal because he had contracted earlier to marry another woman. Following the death of the young princes, however, public favor turned away from Richard and toward Henry, earl of Richmond, who was the head of the rival house of Lancaster. On August 7, 1485, Henry landed at Milford Haven, Wales, collecting allies as he advanced toward England. Richard hastened to meet him, and the hostile armies faced each other on Bosworth Field. Richard fought valiantly but was defeated and killed, and the earl of Richmond became Henry VII, the first Tudor king of England. Edward IV placed far too much power in Richard. Edward could have looked at the past history and realized that throughout history protectors and regents have failed to stay loyal, and eventually overthrown the rightful kings and seized power themselves. Ewan Stevenson 15/10/03 ...read more.