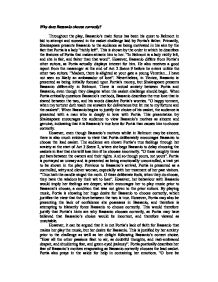 Why does Bassanio choose correctly?

Why does Bassanio choose correctly? Throughout the play, Bassanio's main focus has been his quest to Belmont in bid to attempt and succeed in the casket challenge laid by Portia's father. Primarily, Shakespeare presents Bassanio to the audience as being motivated in his aim by the fact that Portia is a lady "richly left". This is shown by the order in which he describes the features of Portia that makes attracts him to her. "In Belmont is a lady richly left, and she is fair, and fairer than that word". However, Bassanio differs from Portia's other suitors, as Portia actually displays interest for him. He also receives a good report from the messenger at the end of Act 2 Scene 9 before he enters unlike the other two suitors. "Madam, there is alighted at your gate a young Venetian...I have not seen so likely an ambassador of love". Nevertheless, in Venice, Bassanio is presented as being initially focused upon Portia's money, but Shakespeare presents Bassanio differently in Belmont. There is mutual anxiety between Portia and Bassanio, even though they disagree when the casket challenge should begin. When Portia critically questions Bassanio's methods, Bassanio describes the true love that is shared between the two, and his words dissolve Portia's worries. "O happy torment, when my torturer doth teach me answers for deliverance but let me to my fortune and the caskets". ...read more.

Though the methods which she used can be questioned, the love between the two present. Following Portia's giving of the ring, she claims that Bassanio is to never "part from, lose, or give away". Bassanio then romantically promises that "when this ring parts from this finger, then parts life from hence: O then be bold to say Bassanio's dead". Both these promises from both Portia and Bassanio present the true love they feel, and are used as symbols by Shakespeare to represent the climax of the love story in the play. Nonetheless, even though Bassanio and Portia are united at the end of the scene, I believe the regardless of Portia's hints; Bassanio feelings for Portia are heartfelt and true. Bassanio's affection shown through his language implies that his love is sincere. The contrast between the presentations of Bassanio in the opening scene displays the development of Bassanio's character by Shakespeare, and establishes that in this play, Venice is a place of commerce compared to the setting of love, Belmont. Nevertheless, there is no doubt that Bassanio chose correctly due to Portia's hint, and it would be difficult to ponder whether Bassanio would have guessed correctly without the hints, but regardless of the process, the love between Portia and Bassanio is clearly established by the end of Act 3, Scene 2. THE MERCHANT OF VENICE - Study Tasks "The only way to understand the structure of the play is to see Antonio and Shylock as parallel presentations: Antonio as an outsider in the game of love and marriage; Shylock as an outside in Christian Venice." ...read more.

Shylock is shown to be predominantly motivated by money whereas Antonio's main role within the play is due to his lending of money to Bassanio. Additionally, both lack participation within Belmont, the place where all love and marriage matters take place, which reiterates and presents a simple aspect of Shakespeare devices by separating Belmont and Venice. Furthermore, Antonio lacks any female relations within the play, whereas Shylock is betrayed by his daughter, and is emotionally distraught when his ring from his dead wife is sold. Throughout the play, Shakespeare attempts to separate Antonio and Shylock from each other by presenting them as complete opposites and rivals, but constantly shows similar aspects of each other, which increases the interpretations available of the characters. Nevertheless, even though both characters can be viewed as outsiders, both are presented with differing aspects that can allow interpretation to argue to statements. For example, even though Shylock hates the Christians within Venice, he lives and works within Venice, and also trades with Venetians as well as obeying Venetian law, as shown by the trial. "The strict court of Venice must needs give sentence 'gainst the merchant there". Conversely, Antonio's unconditionally trust and love for Bassanio, shown by Antonio's plea prior to his sentencing in the court scene. "Repent but you that you shall lose your friend and he repents not that he pays your debt". Both these aspects present differing aspects of the character, which shows how Shakespeare constantly changes his, portray of his key characters in order to allow varying interpretations and understandings of the men. ...read more.