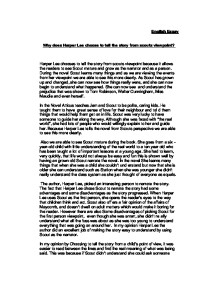 Why does Harper Lee choose to tell the story from scouts viewpoint?

English Essay Why does Harper Lee choose to tell the story from scouts viewpoint? Harper Lee chooses to tell the story from scouts viewpoint because it allows the readers to see Scout mature and grow as the narrator and as a person. During the novel Scout learns many things and as we are viewing the events from her viewpoint we are able to see this more clearly. As Scout has grown up and changed, she can now see how things really were, and she can now begin to understand what happened. She can now see and understand the prejudice that was shown to Tom Robinson, Walter Cunningham, Miss Maudie and even herself. In the Novel Atticus teaches Jem and Scout to be polite, caring kids. He taught them to have great sense of love for their neighbour and told them things that would help them get on in life. Scout was very lucky to have someone to guide her along the way. Although she was faced with "the real world", she had lots of people who would willingly explain to her and guide her. Because Harper Lee tells the novel from Scouts perspective we are able to see this more clearly. Also we are able to see Scout mature during the book. She goes from a six-year-old child with little understanding of the real world to a ten year old who has been taught a lot of important lessons at a young age. ...read more.

There were many people who showed different kinds of courage in the story and even though scout sometimes didn't realise the reader was made aware. Atticus was probably one of the bravest people in the story even though scout and Jem didn't seem to think so. He stood up for a black man who was going against a white man in court. A lot of people disagreed with him, and some went so far as to spit in his face however he carried on against all odds. In the novel Boo Radley was also brave. He risked his own life to save two children that he barely knew. He also faced so much gossip and persecution because of his home life and the way he chose to live. He could have come out any time he wanted to but he didn't, and because he didn't, he suffered for it. Te fact that Boo Radley saved the lives of the children even though he didn't like to go out shows that he has courage and because this is sown through Scouts perspective his courage is shown more. We then begin to hear about how Tom Robinson, a black man, has been accused of raping Mayella Ewell, a white woman, and how everyone is saying that Atticus defends Negroes. The plot then goes on to explain about the trial and what happens afterwards, but we don't hear about Boo Radley until Halloween. ...read more.

I think that Harper lee chose to write the novel from scouts perspective because it gave the reader an added insight into the story and the events of Maycomb. It was good to write it in such a way because even though scout was young she was unusually clever and easily able to grasp what was going on around her and she always acted with the best intentions and didn't care about social class, she was a tomboy in Maycomb which would have been very unusual. Also by writing in this way the story became easier to understand and perhaps more interesting as scout was used as the narrator. Also because of this we can quickly realizes when reading To Kill a Mockingbird that Scout is who she is because of the way Atticus has raised her. While most girls in Scout's position would be wearing dresses and learning manners, Scout, thanks to Atticus's hands-off parenting style, wears overalls and learns to climb trees with Jem and Dill. She does not always grasp social workings this is shown when she tells her teacher that one of her fellow students is too poor to pay her back for lunch, and human behaviour often confuses her, when one of her teachers criticizes Hitler's prejudice against Jews while indulging in her own prejudice against blacks she cant understand it. Atticus's protection of Scout from social pressure has made her forthright and well meaning. ...read more.