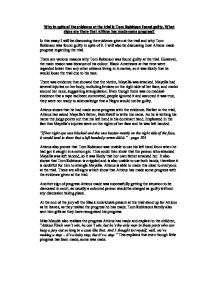 Why in spite of the evidence at the trial is Tom Robinson found guilty. What signs are there that Atticus has made some progress?

Why in spite of the evidence at the trial is Tom Robinson found guilty. What signs are there that Atticus has made some progress? In this essay I will be discussing the evidence given at the trail and why Tom Robinson was found guilty in spite of it. I will also be discussing how Atticus made progress regarding the trial. There are various reasons why Tom Robinson was found guilty at the trial. However, the main reason was because of his colour. Black Americans at that time were regarded lower than any other citizens living in America, so it was likely that he would loose the trial due to his race. ...read more.

Earlier in the trial, Atticus had asked Mayella's father, Bob Ewell to write his name. As he is writing his name the judge points out that his left hand is his dominant hand. Implicated in the fact that Mayella's injuries were on the rights of her face and he was left handed. "If her right eye was blacked and she was beaten mostly on the right side of the face, it would tend to show that a left handed person did it." - page 184. Atticus also proves that Tom Robinson was unable to use his left hand from when he had got it caught in a cotton gin. ...read more.

At the end of the jury all the Black individuals present at the trial stand up for Atticus as he leaves, as they realise the progress he has made. Tom Robinsons family also sent him gifts as they have recognised his progress. Miss Maudie also realises the progress Atticus has made and explain to the children, "Atticus Finch won't win, he can't win, but he's the only man in these parts who can keep a jury out so long in a case like that. And I thought tot myself, well, we're making a step - it's a baby step, but it's a step." This explains that even though little progress has been made, some was made. ?? ?? ?? ?? ...read more.