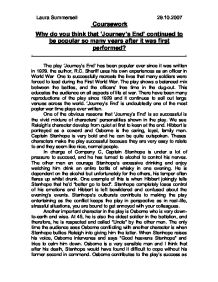 Why do you think that ‘Journey’s End’ continued to be popular so many years after it was first performed?

The play ‘Journey’s End’ has been popular ever since it was written in 1929. the author, R.C. Sheriff uses his own experiences as an officer in World War  One to successfully recreate the lives that many soldiers were forced to lead during the First World War. The play shows a balanced mix between the battles, and the officers’ free time in the dug-out. This educates the audience on all aspects of life at war. There have been many reproductions of the play since 1929 and it continues to sell out large venues across the world. ‘Journey’s End’ is undoubtedly one of the most poplar war time plays ever written.

One of the obvious reasons that ‘Journey’s End’ is so successful is the vivid mixture of characters’ personalities shown in the play. We see Raleigh’s character develop from quiet at first to keen at the end. Hibbert is portrayed as a coward and Osborne is the caring, loyal, family man. Captain Stanhope is very bold and he can be quite outspoken. Theses characters make the play successful because they are very easy to relate to and they seem like nice, normal people.

In charge of Company C, Captain Stanhope is under a lot of pressure to succeed, and he has turned to alcohol to control his nerves. The other men en courage Stanhope’s excessive drinking and enjoy watching him drink an entire bottle of whisky in one evening. He is dependent on the alcohol but unfortunately for the others, his temper often flares up whilst drunk. One example of this is when Hibbert jokingly tells Stanhope that he’d “better go to bed”. Stanhope completely loses control of his emotions and Hibbert is left bewildered and confused about the evening’s events. Stanhope’s outbursts contribute to making the play entertaining as the conflict keeps the play in perspective as in real-life, stressful situations, you are bound to get annoyed with your colleagues.

Another important character in the play is Osborne who is very down-to-earth and wise. At 45, he is also the oldest soldier in the battalion, and therefore, he is respected and called “Uncle” by the other men. The only time the audience sees Osborne conflicting with another character is when Stanhope bullies Raleigh into giving him the letter. When Stanhope raises his voice, Osborne intervenes and says “Good heavens Stanhope” and tries to calm him down. Osborne is a very sensible man and I think that after his death, Stanhope would have found it difficult to cope without his former second in command. Osborne contributes to the play’s success as the audience enjoys seeing how when Raleigh arrives, he is welcomed and made to feel at home by Osborne, helping him to settle into life at war.

Raleigh is the youngest and newest officer in the company. His first days at war are shown during the play and he is on stage in the final moments of his life. During his time at war, he appears to be very keen, energetic and excited to be at war. He is awfully pleased when he is selected to go on the raid – even though at the back of his mind, he must know the dangers he will face. AS Raleigh knew Stanhope before the war, he settles into trench life very quickly showing how adaptable he can be. He also spends lots of his time with his equals as well as with the men below him when he decides not to go to the celebratory dinner after Osborne’s death. This shows his defiance of the class divides which makes him an easy character for the audience to relate to, helping to make the play popular.

These main 3 characters, along with Hibbert and Trotter, seem to compliment each other’s personalities. Some characters are very bold such as Stanhope and Raleigh whereas others are quieter and more reserved. Although Hibbert can appear to be a coward, his problems help explain to the audience the struggles soldiers faced whilst at war.

Most people living in our modern day society will have some understanding of the terrible conditions that everyone living during the two World Wars had to endure. In ‘Journey’s End’, the Officers are continually complaining that their tea tastes of onions. As Officers, the characters’ conditions would have been marginally better than those of the ordinary soldiers. Even so, they have to be careful of the rats eating their boots, and their clothes are infested with lice. Above all, there is no privacy or any washing facilities so all of the men are forces to live in conditions that may make them ill. However, if they are healthy enough to stay at war, they will have no choice but to return to the front line. This was just one of the consequences of living at war.

I have already describers the verbal conflict between the British Officers; however, as they are at war, there is also a lot of physical conflict between Germany and Britain. Over eight and a half million people died during World War One, nine hundred thousand of them British. There were often long, ferocious battles that lasted for days — similar to the German attack we see at the end of the play. The physical conflict in the play so what most people would associate with war so they may go and watch the play to study the effects of battle on small groups of soldiers and the way in which so many people died.

Death is one of the main consequences of life at war. Particularly in times gone by, soldiers were not fully equipped and protected from dangers such as falling debris and rifle fire. In the play, we see he deaths of two Officers and seven men — all from one company over a period of 3 days. The audience can’t help but wonder if the deaths could have been prevented. During the raid, 10 men and 2 Officers are sent to capture one German soldier which is definitely as surplus. The Colonel sent the extra men because he knew that some of them would die, but he made them go anyway. As the audience are left wondering about some aspects of the play, they may return home and ask others on their opinion. This may encourage more people to see the play, thus contributing to the success of ‘Journey’s end’. The deaths of Osborne and Raleigh are just two of the tragic, moving moments of the play.

R.C Sherriff uses a mixture of comedy and tragedy to make ‘Journey’s End’ popular and successful. The deaths of two of the most likable officers are very upsetting for the audience. When the audience hears about Osborne’s death, we are left wondering how everyone – particularly Stanhope – will cope without him.

Raleigh’s death is also upsetting because of the way in which he died. He fells bad that he is lying in the dugout, whilst the rest of the men are risking their lives above him. Stanhope realises that Raleigh will not recover form his injuries so he makes him as comfortable as possible by bringing him water and a blanket. When Raleigh finally passes away, Stanhope leaves the dugout to go and fight, and Raleigh’s corpse is left in peace.  Once everyone has left, a shell lands on the dugout roof and it collapses. The shells carry on flying overhead as the play ends.

‘Journey’s End’ also has some comic moments such as when Stanhope asks Mason if there is any pâté de fois gras. Mason’s response “no sir, the milkman asn’t been yet,” clearly show the class divides as Mason would never have experienced the delicacy of fois gras as it was too expensive. I think that R.C Sherriff uses these jokes to keep the play entertaining and to make the play slightly light-hearted in certain places. The jokes and laughter also show that friendships can be formed even during strenuous situations such as wars. The comedic moments in the play contribute to it’s success as the play isn’t completely depressing as it can be enjoyed both for the comic and tragic moments. The audience can take some jot from the fact that together, soldiers kept each other entertained, to try and forget about the war going on above them.

Another factor in ‘Journey’s End’ success is the fact that to this day, we continue to have wars. Currently, Britain has soldiers in Iraq and Afghanistan and we have had many other wars since 1918. At the time, governments agreed that World War One should be “the war to end all wars” which clearly didn’t happen. Nowadays, technology has advanced and modern troops have access to super-sonic fighter jets and more protection such as bullet-proof clothing. Medical facilities have also advanced and nowadays, injured soldiers can be airlifted to hospital just minutes after they were injured. However, we still hear complaints about conditions for soldiers so we can’t help but wonder how much conditions have really improved. One reason ‘Journey’s End’ may be successful sit hat modern day families, with loved ones at war, may want to know how previous generations coped at wear-time situations.

The final important factor in the success of the play is that World War One war a relatively recent event in Britain’s history. As the war affected so many people from our country, I think that more people would go and see the play. As we are also approaching the 90th anniversary of the end of the war, I believe that now, more than ever, people will go to productions to remember any relatives who lost their lives during these four years.