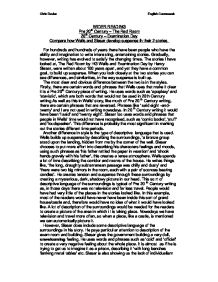 WIDER READING Pre 20th Century - The Red Room 20th Century - Examination Day Compare how Wells and Slesar develop suspense ih their 2 stories For hundreds and hundreds of years there have been people who have the ability and imagination to write interesting, entertaining stories. Gradually, however, writing has evolved to satisfy the changing times. The stories I have looked at, The Red Room by HG Wells and Examination Day by Henry Slesar, were written about 100 years apart, and yet they have a common goal, to build up suspense. When you look closely at the two stories you can see differences, and similarities, in the way suspense is built up. The most clear and obvious difference between the two is in the styles. Firstly, there are certain words and phrases that Wells uses that make it clear it is a Pre 20th Century piece of writing. He uses words such as 'apoplexy' and 'atavistic', which are both words that would not be used in 20th Century writing As well as this in Wells' story, like much of Pre 20th Century writing, there are certain phrases that are reversed. Phrases like ' said eight-and-twenty' and I are not used in writing nowadays. In 20th Century writing it would have been 'I said' and 'twenty eight'. ...read more.

He says things like 'and the moistness of his mothers eyes, the scowl on his fathers face, spoiled the mood of fluttering expectation'. He is trying to create a miserable, gloomy, tense atmosphere so that the reader wonders why they are so depressed. He wants you to put yourself into the story and feel all the emotions that the characters are feeling so you will enjoy the story more. The two authors have another difference in style, the sentence length. Slesar tends to use very even length sentences, usually fairly short ones. This keeps the story moving along at a steady pace and keeps it flowing. However, Wells does not use even sentence length throughout and varies them throughout. This is especially noticeable when the man is in the Red Room. Wells mixes up the length of the sentences a lot in this part of the story. Generally he uses long ones, but will include the occasional short one from time to time, 'The candle fell from my hand'. By using long sentences it allows him to use lots of punctuation, comas, semi colons etc. When reading aloud, this method of writing makes the reader snatch at breath. The reader must read quickly and by the time he reaches a bit of punctuation he will need a breath, so will snatch at it quickly in order to keep the story flowing along smoothly. ...read more.

This is a very effective twist. Slear's twist is not as complex and clever as Wells', yet it is still effective. Slesar surprises us at the end when we find out that the boy has died for doing too well on the test. This is very shocking to the audience and is a good twist to finish with. It is effective because we all expect doing well on the exam to be good news, but it is the worst news ever. However, I don't think it is as effective as Wells' ending' as the reader is not expecting a twist at the end, but in 'Examination Day' the reader expects a twist. Both the stories have to achieve the same goal, using various similar and different techniques and methods. They build suspense through mystery and an uncertain future. Both of them are written in the style and language that is typical of the time period they are written in, and use methods you would expect from this time. Wells uses fairly complex language and techniques, which is what people in the late 19th Century would have wanted. People nowadays may not appreciate this level of complexity and, therefore, Slesar has kept his language and techniques simple. Writing is all about writing what people want to read, and as man has evolved over the last 100 years, so has writing to suit our developing needs. Chris Davies English Coursework ...read more.