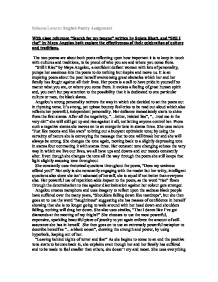 With close reference Search for my tongue written by Sujata Bhatt, and Still I rise by Maya Angelou both explore the effective

Rebecca Leverett English Poetry Assignment With close reference "Search for my tongue" written by Sujata Bhatt, and "Still I rise" by Maya Angelou both explore the effectiveness of their celebration of culture and traditions. The two poems are about both poets reflecting upon how important it is to keep in touch with cultures and traditions, to be proud of who you are and where you come from. "Still I Rise" by Maya Angelou, a confident defiant woman with lots of personality, pumps her sassiness into the poem to do nothing but inspire and move us. It is an inspiring poem about the poet herself overcoming great obstacles which her and her family has fought against all their lives. Her poem is a call to have pride in yourself no matter what you are, or where you come from. It evokes a feeling of great human spirit and, you can't but pay attention to the possibility that it is dedicated to one particular culture or race, the black slaves. Angelou's strong personality mirrors the way in which she decided to set the poem out in rhyming verse. It's strong, yet upbeat bouncy feel cries to be read out aloud which also reflects her powerful, independent personality. ...read more.

She chooses to use the most powerful, expensive, sparkling beautiful piece of jewelry to yet again enforce the amount of self- assurance she has in herself. She then goes on to use an extremely powerful metaphor to describe herself as "...a black ocean", showing the strength and power, by using hyperbole, leaping out of her. "Leaving behind nights of terror and fear" As she begins to come to an end the positive tone starts to bounce back in, she explains even though her and her family has suffered and to be made to feel smaller than others, she doesn't cry and moan. She uses everything she has been through to maker her stronger. Ultimately she uses repetition "I rise", by repeating those two simple words she sums up her whole personality and what she is all about, no matter what she will rise through it. As the words float off the page, it is as if she is inviting us to come with her to stand up for out rights and form barrios against racism and discrimination. Maya Angelou inspires me to stand up for what I want, to go where I want, and to be what ever I want to be. ...read more.

to spit it out" However Bhatt has a dream and in light with "Still I Rise" she finds out anything is possible, her mother tongue begins to grow back as she slowly starts to speak Gujarati. Bhatt also lets us come into her powerful dream because of the use of phonetics. With the use of Gujarat in "Search for my tongue" and with the strong bouncy rhythm in "Still I rise" both poems scream to be read out loud. "It grows back, a stump of a shoot" Like Angelou, Bhatt also uses nature to bring out the uplifting tone of the poem. She conveys the idea that nature is certain, the rain will always come back in April and the sun will always come back to shine in June. She then uses positive repetition "... the bud opens, the bud opens..." bringing an energetic flow into the poem the use of repetition also adds excitement and tension building to an immensely powerful metaphor "It blossoms in my mouth". Sujata Bhatt finishes the elevating moving poem on a high note. Angelou and Bhatt explore both the ups and downs of their lives but both of the poets end their poems with them defeating their problems and worries and standing up for their rights. ...read more.