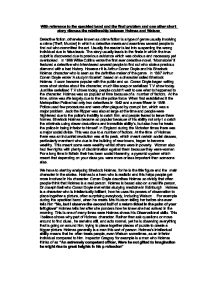 With reference to the speckled band and the final problem and one other short story discuss the relationship between Holmes and Watson Detective fiction, otherwise known as crime fiction is a type of genre usually involving a crime (Theft, Murder) in which a detective meets and examines several people to find out who committed the act. Usually the reader is led into suspecting the wrong individual due to false leads. The story usually leads to the finale in which the true culprit is discovered due to previous evidence which was obvious and necessary yet overlooked. In 1868 Wilke Collins wrote the first ever detective novel, 'Moonstone' it featured a detective who interviewed several people to find out who stole a precious diamond with a bad history. However it is Arthur Conan Doyle and his Sherlock Holmes character who is seen as the definitive maker of the genre. In 1887 Arthur Conan Doyle wrote 'A study in Scarlet', based on a character called Sherlock Holmes. It soon became popular with the public and so Conan Doyle began writing more short stories about the character, much like soap or serialised T.V show today. Just like serialised T.V shows today, people couldn't wait to see what to happened to the character. ...read more.

Holmes acts completely out of character "Holmes edged his way around the wall, and flinging the shutters together, he bolted them securely" This sentence shows what has happened to Holmes. Instead of the normally calm, somewhat measured Holmes, instead we see a man who is jumpy, edgy and frightened. Even Holmes admits it when Watson asks if Holmes is afraid of something and Holmes replies 'Well, I am". During his conversation with Watson, Holmes clearly knows that it is professor Moriarrty who is threatening his life and Holmes shows respect for him, regarding the man as a genius. Despite only first appearing in this adventure, Moriarty is a very important character, it is a person who appears to be Holmes intellectual equal, as if he what Holmes's could have been if he walked down a different path. During their conversation with each other, for example, we see them each respecting each others skill, Moriarty calmly threatening Holmes "You must drop it Holmes" said he, swaying his face about "You really must, you know" Another important fact is that neither is better than the other, they are both equal, which I think Conan Doyle was trying to stress to explain why they both went over the cliff together, locked in each others arms. ...read more.

Holmes and Watson used to live as bachelors until Holmes got married in Which shows that their relationship may not of only have grown so intimate during their adventures, but also because the were living together. Also at the start of the 'Sliver Blaze' and the 'Speckled band', we clearly see just from picturing the seen how close they are. In the 'speckled band' Holmes is standing next to Watson's bed apologising from waking him. In the 'silver blaze', they are sitting down together having breakfast with each other. These scenes show that they have a very deep relationship. Watson's marriage also affects their relationship because it means that they no longer live with each other and therefore may have grown apart. The conclusion of my studies shows that Holmes and Watson are more than simply associate. They have an intimate and deep friendship, which is strengthened through their adventures together. Holmes and Watson work best during the investigations together, combining their different qualities and strengths to help them solve the case. Holmes in the relationship is the more dominant figure, intellectually smarter than Holmes and mainly contributing to the case itself using his powerful powers of observation and imagination. Watson however, is more down to Earth and his role is to assist Holmes by protection (carrying the gun, accompanying Holmes) and being the link between Holmes and us. He is also there perhaps to keep Holmes and check, for when he worries about Holmes smoking. ...read more.