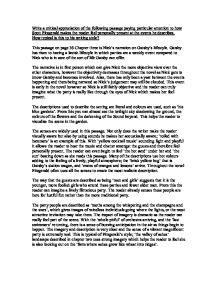 Write a critical appreciation of the following passage paying particular attention to how Scott Fitzgerald makes the reader feel personally present at the events he describes - How typical is this to his writing style?

Write a critical appreciation of the following passage paying particular attention to how Scott Fitzgerald makes the reader feel personally present at the events he describes. How typical is this to his writing style? This passage on page 36 Chapter three is Nick's narration on Gatsby's lifestyle. Gatsby has risen to having a lavish lifestyle in which parties are a weekly event compared to Nick who is in awe of the sort of life Gatsby can offer. The narrative is in first person which can give Nick the more objective view over the other characters, however the objectivity decreases throughout the novel as Nick gets to know Gatsby and becomes involved. Also, there has only been a year between the events happening and them being narrated so Nick's judgement may still be clouded. ...read more.

The reader can even begin to feel 'the hot sand' under her and 'the sun' beating down as she reads this passage. Many of the descriptions use hot colours adding to the feeling of a lively, playful atmosphere; the 'brisk yellow bug' that is Gatsby's station wagon, and 'crates of oranges and lemons' arrive. Throughout the novel Fitzgerald often uses all the senses to create the most realistic description. The way that the guests are described as being 'men and girls' suggests that it is the younger, more foolish girls who attend these parties and fewer older men. From this the reader can imagine a lively flirtatious party. The reader already senses these people are here for lustful fun rather than the more traditional party. The party people are described as 'moths among the whispering and the champagne and the stars', which gives images of mindless individuals going where the lights, or the most attractive invitation may take them. ...read more.

Like many events throughout the novel Nick has never been to one of Gatsby's parties before so everything is new and exciting for him and so the tone throughout this and many events in the novel are excited. This allows the reader to also feel the excitement of going somewhere for the first time and this is one writing style in which Scott Fitzgerald makes her feel personally present at these events. 654words The party reaching an ultimate crescendo with 'the air alive with chatter and laughter', 'the bar in full swing' and 'the orchestra playing yellow cocktail music' and with 'laughter becoming easier minute by minute'. This style is typical of Fitzgerald as he often uses strong imagery to make the reader personally present. Another example of this is at the beginning of chapter two but here Fitzgerald describes the 'valley of ashes' landscape, rather than an event and people. ...read more.