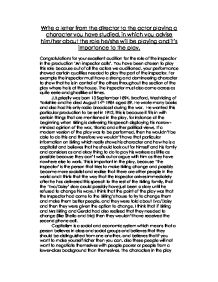 Write a letter from the director to the actor playing a character you have studied, in which you advise him/her about the role he/she will be playing and it(TM)s importance to the play.

Write a letter from the director to the actor playing a character you have studied, in which you advise him/her about the role he/she will be playing and it's importance to the play. Congratulations for your excellent audition for the role of the inspector in the production 'An inspector calls'. You have been chosen to play this role because out of all the actors we auditioned, your performance showed certain qualities needed to play the part of the inspector. For example the inspector must have a strong and domineering character to show that he is in control of the others throughout the section of the play where he is at the house. The inspector must also come across as quite eerie and ghostlike at times. J.B.priestly was born 13 September 1894, Bradford, West riding of Yorkshire and he died August 14th 1984 aged 89. He wrote many books and also had his only radio broadcast during the war. He wanted this particular production to be set in 1912, this is because it fits in with certain things that are mentioned in the play, for instance at the beginning when Birling is delivering his speech displaying his narrow-minded opinion of the war, Titanic and other political views. If a modern version of the play was to be performed, then he wouldn't be able to do this and therefore we wouldn't have that particular information on Birling which really shows his character and how he is a capitalist and believes that he should look out for himself and his family and considers as and okay thing to do to pay his workers as little as possible because they can't walk out or argue with him as they have nowhere else to work. ...read more.

This is also proven when the Inspector each shows them the picture of Eva Smith(Daisy), he shows them each at different times, never allowing more than on person to view the picture at a time and this shows how precise and accurate his character is. Also the way the Inspector goes about asking them so calm and patient yet demanding and forceful at the same time has a huge impact on Sheila and Eric, perhaps he even has a slight impact on Mr & Mrs Birling and Gerald. This is proved towards the end when Gerald returns after leaving the Birling family to go for a walk and he tells them about his suspicions regarding the Inspector, he says 'there is no Inspector Goole'. He comes back to tell them that the Inspector was not a genuine Inspector and that he knew something was suspicious about him all along, to which the Birling's all agree that they also felt that something about him was not right. The query of the Inspector being some kind of ghost/ghoul is proven at the end of act three, when Mr Birling receives the phone call telling them that a girl has just died in the infirmary after swallowing some disinfectant and a police Inspector is coming round for them to answer some questions. The use of props in the house during the play is also meant to give us a hint about this. For instance the clock is supposed to show that the time has stopped while the Inspector is there because he wants them to realise and to change, however when only Shelia and Eric ...read more.

However he is very demanding in the way he says this. 'I'd like some information if you don't mind Mr Birling. Two hours ago a young woman died in the Infirmary. She'd been taken there this afternoon because she'd swallowed a lot of strong disinfectant. Burnt her insides out of course.' He says this as thought Mr Birling should also know about it, and I think he makes it clear from the start that he is accusing Mr Birling of having some responsibility for her death. The Inspector could show this perhaps by continuously glancing at the Inspector throughout the time that he is telling Mr Birling about her death, indicating responsibility. Rehearsals start in one weeks time and I advise you to read the play carefully, particularly taking notice of the Inspectors lines and the scenes and lines of speech which I have identified. You should also try to develop your version of the character of the Inspector by continuously reading the Inspector's lines and looking deeper into his character and thinking about how he is demanding and perhaps forceful in his approach towards the Birling family and try to make sure that you fully understand the reasons for the Inspectors appearance and the fact that he arrived at the moment when Mr Birling had just finished his speech, and you also need to make sure that your character does create some confusion on his arrival and throughout the play until the end of the play when his true identity and purpose is left for the audience to decide on fully. ...read more.