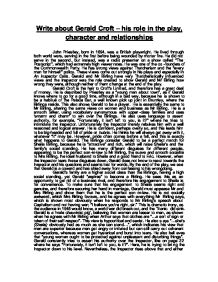 Write about Gerald Croft his role in the play, character and relationships

Write about Gerald Croft - his role in the play, character and relationships John Priestley, born in 1894, was a British playwright. He lived through both world wars, serving in the first before being wounded by mortar fire. He did not serve in the second, but instead, was a radio presenter on a show called "The Postscript", which had extremely high viewer rates. He was one of the co-founders of the Commonwealth Party. He has strong views against Thatcherism and the "every man for himself" policy. These views come out strongly in his plays and especially in An Inspector Calls. Gerald and Mr Birling have very Thatcheristically influenced views and the Inspector was the role created to show Gerald and Mr Birling how wrong they were, although neither of them change at the end of the play. Gerald Croft is the heir to Croft's Limited, and therefore has a great deal of money. He is described by Priestley as a "young man about town", as if Gerald knows where to go for a good time, although in a bad way, because he is shown to be a habitu� of the Palace Bar, a well known pick up joint in Brumley, where the Birlings reside. This also shows Gerald to be a player. He is essentially the same to Mr Birling, sharing the same views on women and business as Mr Birling. ...read more.

This view is hypocritical and sexist. He also says "...she's (Sheila) obviously had as much as she can stand...", which indicates his view that men are superior because men get angry or irritated but can still carry out coherent conversations, whereas women get hysterical and burst into tears. He also believes that "young women ought to be protected against unpleasant and disturbing things". Gerald constantly tries to assert his authority over the Inspector, like on page 22 where he says "Fortunately, it isn't left to you, is it?". Here, he is trying to bring the Inspector down to his level. Nevertheless, the Inspector rises above that and either cuts Gerald off when he is about to try to speak or merely responds with a completely sensible and logical answer, for instance: "Gerald: I don't see why- Inspector: (cutting in, massively) You heard what I said before, Mr Croft." Gerald also tries to assert his authority through his money and company, and Mr Birling helps him to do so, when Arthur introduces him to the Inspector as "Mr Gerald Croft - the son of Sir George Croft - you know, Crofts Limited." Gerald's engagement to Sheila is purely for convenience. He does not really love her and only sees this as an opportunity to get rid of a business rival, while also buying into more money. In this way, he is rather desperate, "...I insist upon being one of the family now. I've been trying long enough, haven't I? ...read more.

Upon returning to the house after the Inspector leaving, Gerald begins do deconstruct both the Inspector and Eva/Daisy in an obsessive and desperate way. He left the house earlier in the play, leaving the audience thinking that he had gone to reflect, however, when he returns to the house, he seems to have spent his time finding out whether the Inspector is real or not. The Birlings are surprised by the news that he "wasn't a police officer" and the elder Birlings and Gerald take this as their cue to clear their names. Gerald convinced the elder Birlings that Eva was not real by presenting the idea that the photograph that the Inspector showed them was not the same photograph that any of the others saw, saying "...how do you know it's the same girl?" He does not learn from his mistakes, like the elder Birlings, and they accept him back into the family. However, Sheila is not so ready, responding negatively when he says "Everything's all right now, Sheila. (...) What about this ring?" Gerald seems as if he never will change, as if to become much like Arthur Birling as he ages. The idea that Sheila will marry him will probably be true, however, she will most likely treat him with a cooler attitude than before. Mr and Mrs Birling will get a boost on the social ladder from the marriage, and the joint venture in the company will prosper. However, Gerald will grow up to be a not so very nice man in his senior years. ...read more.