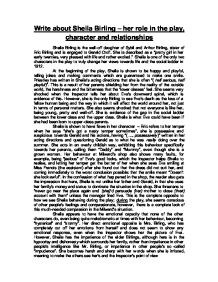 Write about Sheila Birling her role in the play, character and relationships

Write about Sheila Birling - her role in the play, character and relationships Sheila Birling is the well-off daughter of Sybil and Arthur Birling, sister of Eric Birling and is engaged to Gerald Croft. She is described as a "pretty girl in her early twenties, very pleased with life and rather excited." Sheila is one of the only two characters in the play to truly change her views towards life and the social ladder in 1912. At the beginning of the play, Sheila is shown to be happy and playful, telling jokes and making comments which are guaranteed to make one smile. Priestley has written in Sheila's acting directions that she is often "(half serious, half playful)". This is a result of her parents shielding her from the reality of the outside world, the harshness and the bitterness that the 'lower classes' feel. She seems very shocked when the Inspector tells her about Eva's downward spiral, which is evidence of this. However, she is the only Birling to see Eva's death as the loss of a fellow human being and the way in which it will affect the world around her, not just in terms of personal matters. She also seems shocked that not everyone is like her, being young, pretty and well-off. ...read more.

Her direct emotional opposite is Mrs. Birling, who has completely cut off her emotions from herself and does not seem to show any emotional response, even when the Inspector shows her the picture of Eva. However, Sheila has the impatience of the elder Birlings, although hers is in the hypocrisy and dishonesty which surrounds her family, rather than impatience in other people's intelligence like Mr. Birling, or impatience in other people's so-called "impudence". She becomes harsh and sharp with her words when she is irritated, meaning to make the others see her's and the Inspector's point of view Sheila seems to truly be affectionate towards Gerald; however, he does not directly return her affections. She is possessive of him, saying that she'd "hate (him) to know all about port - like one of these purple faced old men". She acts the way that she is expected to be; demure, na�ve, agreeing with everything Gerald says, and having a lack of self-esteem. Her entire existence is focused on making a "good" marriage so her family can buy into more money and her father can get rid of a business rival. By contrast, Eva makes her living through working with her hands within the industry that the Birlings have much influence over. ...read more.

Sheila recognises that the way that the elder Birlings had acted in the presence of the Inspector was a fa�ade, and they have indeed started "all over again". At the end, Sheila's refusal to accept back Gerald's engagement ring or his assumption that she will shows how she has entirely changed as a person - at the beginning, Sheila was ecstatic when Gerald handed her the ring, even "kissing him hastily", but at the end of the play, when Gerald tells her "everything's all right now, Sheila", both the audience and Sheila know that everything will certainly not be alright, and when Gerald asks her "What about this ring?", Sheila says "No, not yet. It's too soon. I must think." The tone of voice used when she says "...not yet" implies that she is willing to give Gerald the chance to change, but that she will marry him even if he does not, leading to an unhappy marriage. Sheila's acceptance into the 'new' thinking methods of the Inspector and her rejection of Gerald's ring adds to the uncertainty of the play and the audience's and the Birlings' shock when a telephone call comes through saying a girl has committed suicide. The audience's knowledge of the sinking of the Titanic and both World Wars adds to their uncertain view of the Birlings' future and their incredulous view of the Birlings' easy complacency. ...read more.