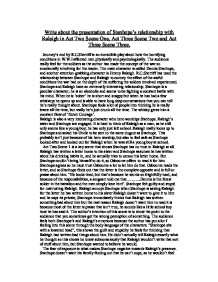 Write about the presentation of Stanhope's relationship with Raleigh in Act Two Scene One, Act Three Scene Two and Act Three Scene Three. Journey's end by R.C.Sherriff is an incredible play about how the horrifying conditions in W.W.I affected men physically and psychologically. The audience really feel for the soldiers as the author has made the concept of the war so emotionally involving for the reader. The main character is called Dennis Stanhope, and another attention-grabbing character is Jimmy Raleigh. R.C.Sherriff has used the relationship between Stanhope and Raleigh to convey the effect of the awful conditions the war had on the depth of the suffering the solders involved experienced. Stanhope and Raleigh have an extremely interesting relationship. Stanhope is a peculiar character; he is an alcoholic and seems to be fighting a constant battle with his mind. When he is 'sober' he is short and snappy but when he has had a few whiskeys he opens up and is able to have long deep conversations that you can tell he's really thought about. Stanhope fools a lot of people into thinking he is really brave all the time, but really he's just drunk all the time. The whisky gives him a constant flow of 'Dutch Courage'. Raleigh is also a very interesting character who hero worships Stanhope. Raleigh's sister and Stanhope are engaged. It is hard to think of Raleigh as a man, as he still only seems like a young boy; he has only just left school. ...read more.

Stanhope asks Mason to bring some whisky, even after they have had champagne; he obviously just wants to get drunk to forget everything, he is running away from his problems. Stanhope then goes up to see Raleigh, "I Thought I told you to come down to dinner at eight o'clock" he said and Raleigh apologized. Stanhope treats Raleigh as if he is a young child and tells him off for eating with the men and eating their rations, and not coming down for dinner, he makes him sit down. Raleigh confront Stanhope about how he feels "im awfully sorry Dennis, if-if I annoyed you by coming to your company" and Stanhope says he resents Raleigh being a fool; this must have put Raleigh down. Raleigh seems really shocked that Stanhope can sit and smoke cigars and drink Champagne, he only shows his real emotions when Raleigh says how he feels, Stanhope is shocked at this and explains, "The one man I could trust-my best friend-and you don't think I care". This is the first time we see any real emotion from Stanhope and then he gets furious at Raleigh and tells him to get out. R.C Sheriff uses a lot of hyphens in Raleigh's speech to show the audience he is nervous and they are also used in Stanhope's speech to show that he is blurting out what he feels instead of using prepared sentences. The scene ends on a big climax. Raleigh can't cope with the death of Osbourne very well, but the rest of the officers can, it is Raleigh's first experience like this but all the other men have to live with it on a day-to-day basis, it was so traumatising. ...read more.

Stanhope leaves to get the things that Raleigh asked for, and when he returned Raleigh had tragically passed away. Even though Raleigh and Stanhope have had a rocky relationship throughout the play they still managed to be so close in Raleigh's last moments of life. Although Stanhope may have been able to do this as he knew Raleigh was going to die and that he knew how the ways of him coping wouldn't get back to his family now and no longer 'resented' Raleigh being there to see it. There is a huge contrast between the beginning and the end of their relationship where Stanhope was very short tempered with Raleigh and nervous around him to the end where he comforted him when Raleigh was scared. Before when Stanhope was scared, Raleigh didn't comfort him because he didn't realise he was scared, Raleigh just bugged him, where as when Raleigh was scared Stanhope realised and helped him. R.C Sheriff has portrayed the emotions of the solders in the script and their body language so well that the reader feels the emotions of the solders. He has also included a good set of characters, which I think all work exceptionally well together and are what make the play as tremendous as it is. R.C Sheriff is likely to of been one of the characters in the play, maybe Stanhope or likely experienced highly similar things to what he has expressed in 'Journey's End', as he has written about it extremely passionately that the audience feel the emotions of the soldiers so deeply, this is what makes the play as grand as it is. Karla Paine ...read more.