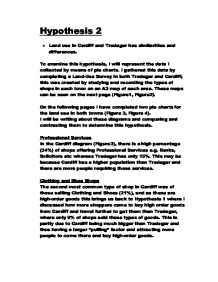 To examine this hypothesis, I will represent the data I collected by means of pie charts. I gathered this data by completing a Land-Use Survey in both Tredegar and Cardiff; this was created by studying and recording the types of shops in each town on an A3 map of each area. These maps can be seen on the next page (Figure1, Figure2).

On the following pages I have completed two pie charts for the land use in both towns (Figure 3, Figure 4).

I will be writing about these diagrams and comparing and contrasting them to determine this hypothesis.

In the Cardiff diagram (Figure3), there is a high percentage (34%) of shops offering Professional Services e.g. Banks, Solicitors etc whereas Tredegar has only 15%. This may be because Cardiff has a higher population than Tredegar and there are more people requiring these services.

The second most common type of shop in Cardiff was of those selling Clothing and Shoes (21%), and as these are high-order goods this brings us back to Hypothesis 1 where I discussed how more shoppers came to buy high order goods from Cardiff and travel further to get them than Tredegar, where only 9% of shops sold these types of goods. This is partly due to Cardiff being much bigger than Tredegar and thus having a larger “pulling” factor and attracting more people to come there and buy high-order goods.

There are only 1% of buildings in Cardiff that are public whereas it was 5% in Tredegar, this may be because there are more Libraries, town halls etc in Tredegar to accommodate the need for them in small, localised towns alike. In Cardiff there were much less public buildings because a large city CBD is mainly used for tourism attractions and shopping.

2% of land use in Cardiff is used to accommodate transport facilities whereas there was 0% in Tredegar. I have created two pie charts on the next pages (Figure 5, Figure 6) showing what types of transport were used to get to each town and the percentage of people using each type.

I made these pie charts using the information from the Cardiff and Tredegar questionnaires. As you can see, 44% of people in Cardiff used cars as a transport method compared with 42% in Tredegar, which is a similarity, but as Cardiff has a larger population and more people visiting it from further away (this was proved in Hypothesis 1) it needs to accommodate a larger number of vehicles. This is common sense as vehicles are needed to visit Cardiff from further afield and so this is why Cardiff has more land use suited for transport facilities compared to Tredegar. Also, more shoppers chose to walk to Tredegar (34%) compared to 16% in Cardiff. This supports Hypothesis 1 in that it proves shoppers only need to travel a short distance to get to Tredegar’s CBD and again shows that Tredegar has no need for major transport facilities as most of the shoppers are local.

18% of land use in Cardiff was dedicated to Catering and Entertainment, compared with 22% in Tredegar. This may be because Cardiff’s CBD is mostly selling shopping goods and Tredegar has a “localised” town that has to meet the demands of the residents travelling short distances to pubs, takeaways, cafeterias etc.

There was a major jump in Tredegar which had 13% allocated to these facilities. This may be down to the fact that people mostly travel short distances for personal services and as we proved that people travel from further afield to Cardiff, they are not requiring these types of services whereas in Tredegar people are coming from a relatively short distance and do require these services. Hence this is why there are more of these facilities in Tredegar to accommodate these needs.

17% of land use in Cardiff was taken by Specialist Shops, these included bookshops, jewellers, sport shops and florists. This was comparable with Tredegar which had 21% of land use dedicated to these shops. This should really be taken as a similarity between the land uses of both towns. This is down to the simple fact that most CBD’s include these types of shops and shoppers may require these services whether travelling from short or long distances.

1% of land use in Cardiff was used for Furniture and Carpet stores and 0% for Tredegar. This supports the theory that people travel further to shop for high-order goods. As we proved people travel further distances to shop in Cardiff in Hypothesis 1, this is why Cardiff has more of these types of shops that sell high-order goods compared to Tredegar.

There was a significant difference in the number of shops selling convenience goods in both towns, 1% for Cardiff and 12% for Tredegar. This brings us directly back to Hypothesis 1 where we proved people mostly travel short distances for convenience goods and as we also proved that most people travel short distances to shop in Tredegar, this is why Tredegar has more land use dedicated to Convenience Stores. Cardiff has a small number of these stores mostly down to the fact that Cardiff has more stores selling high-order goods and this again proves why people travel further to shop in Cardiff.

Both Cardiff and Tredegar had 3% of land use allocated to Major Shopping Units, these included department stores, supermarkets etc. This is a major similarity between Cardiff and Tredegar’s land use and I believe this may be down to the fact that supermarkets and department stores sell both high-order and low-order goods and as both towns need these types of stores, (regardless of the distances travelled to each) there is no reason for there to be any significant difference in how many are allocated in each town.

I believe there are a number of both similarities and differences between Cardiff and Tredegar’s land use, but there are more differences than similarities and this may be down to the fact that both places are quite different, being that Tredegar is a town and Cardiff a city, and both have different populations, sizes of the CBD and different tourist appeals which will affect the land use in each town significantly. I believed I have proved this Hypothesis well with the aid of graphs and ICT and I don’t think I could improve it greatly.