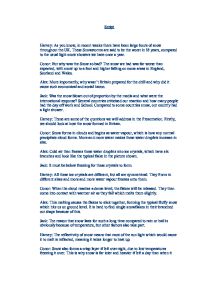 Geography in the News

Script Harvey: As you know, in recent weeks there have been large bouts of snow throughout the UK. These Snowstorms are said to be the worst in 18 years, compared to the usual light snow showers we have once a year. Conor: But why was the Snow so bad? The snow we had was far worse than expected, with snow up to a foot and higher falling on some areas in England, Scotland and Wales. Alex: More importantly, why wasn't Britain prepared for the chill and why did it cause such economical and social havoc. Jack: Was the snow blown out of proportion by the media and what were the international response? Several countries criticised our reaction and how many people had the day off work and School. Compared to some countries snow, our country had a light shower. Harvey: These are some of the questions we will address in the Presentation. Firstly, we should look at how the snow formed in Britain. Conor: Snow forms in clouds and begins as water vapour, which is how any normal precipitate cloud forms. More and more water makes these water droplets increase in size. Alex: Cold air then freezes these water droplets into ice crystals, which have six branches and look like the typical flake in the picture shown. Jack: It must be below freezing for these crystals to form. ...read more.

Alex: Russia blames us for weak preparation and says its own schools are almost always open, we need to toughen up to weather like this as with higher levels of Uneven weather patterns, global warming will take its toll in years to come with worse weather. Jack: Although Schools were badly affected, this was mainly down to lack of travel, which was hit with a bombshell of breakdowns, accidents and other hindrances. Harvey: Travel services were in ruins, as the weather in Britain is not like this normally, our vehicles, roads and speed limits are not built around it naturally causing mayhem. Conor: Icy roads made travel to and from work or school or in fact anywhere near impossible in most places, with Grit on the roads diminishing fast, smaller roads were left snowy so several people were literally trapped in their houses. Alex: On top of this, even public transport failed. On the first day six million bus passengers were left waiting for a bus never to come, nearly all bus services in London were halted due to dangerous conditions and in Birmingham the bus services continually switched timetables and routes. Jack: In London, every tube line and train line was suspended at least partially except Victoria. Harvey: With hundreds of mainline commuter rail services closed, people were stranded and many unable to get to work. ...read more.

Conor: Aside from business losses, the British economy lost around �500 million a day due to the weather; with consumers stuck at home the industry was useless during the week of snow. Alex: There were warnings sent out to around three thousand companies across Britain saying they would have to close if profits did not pick up due to massive losses during the time off. Around 80% of Britains business suffered bad losses due to the economic chill. Conor: There was even a teenage boy treated for Hypothermia in Worcestershire. He was walking and slipped into a freezing lake alone, he spent around 15 minutes in the water before being heard by two kindly walkers, who aided the boy and called an ambulance. In the severe weather, the boy is lucky to be alive as a few more minutes in the water could have killed him. Alex: The Boy made a full recovery in a Hospital in Redditch luckily, had it not been for the walkers he may not have been so lucky. These harsh weather conditions are clearly to harsh for our economy to stay in a solid state, which is bad reflectively on the government, the country needs to learn from its mistakes and take on board advice from places like Siberia. Harvey: With uprising Global warming, these conditions may not have been a one off, meaning our country could be in trouble unless we react in a better way. Jack: Thank you for listening. ...read more.