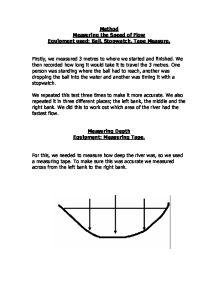 Method Measuring the Speed of Flow Equipment used: Ball, Stopwatch, Tape Measure. Firstly, we measured 3 metres to where we started and finished. We then recorded how long it would take it to travel the 3 metres. One person was standing where the ball had to reach, another was dropping the ball into the water and another was timing it with a stopwatch. We repeated this test three times to make it more accurate. We also repeated it in three different places; the left bank, the middle and the right bank. We did this to work out which area of the river had the fastest flow. Measuring Depth Equipment: Measuring Tape. For this, we needed to measure how deep the river was, so we used a measuring tape. To make sure this was accurate we measured across from the left bank to the right bank. Measuring Width Equipment: Tape Measure. After measuring the speed of flow and depth, we had to measure the width. We had to measure the full bank position and the width of the river channel to see the difference in each section. The river is neither too big nor too small, so it is easier to measure. We carried out this experiment in three positions and the meander. Measuring the Load of River Equipment: Tape Measure. To carry on with this experiment we had to measure ten different stones or pebbles in each section of the river. ...read more.

Limited water in upper course. Lower course needed waders due to depth of river. Accuracy because of fast flowing water. Measuring width. Same as above. A tape measure was used to measure the width of the channel and the bank full width at three stages. To find out how the width of the river changes from source to mouth. Waders needed in lower course. Accuracy, especially at bank full positions. Measuring load. Same as above. We picked 10 stones at random and measured width, length and depth. To find out how the load changes from source to mouth. Difficulty in getting stones. Accuracy of measuring. Measuring volume. In classroom using results of fieldwork. Get measurements of width and depth and use trapezium rule to work out volume and discharge. Discharge=cross sectional area (m�) x average speed (m/s). Difficulty working out the figures. Accuracy of measurements. Taking digital photos. During fieldwork. At each point we took photos of the river and the valley. To show how the river changes from source to mouth. Difficulty obtaining camera and quality of photos when printed out. Ordinance survey map. Classroom activity. Using the OS map we worked out the long section and cross section. We also wrote a description of the river using grid reference points. To show cross sections and long sections of rivers. We found drawing the cross-sections very difficult because the contour lines were so small. Our aim was to find out how the River Ffrwydwyllt changes from source to mouth. ...read more.

the equipment we used to measure the river was very basic. If we had better equipment maybe our results would have been more accurate. We could have also improved on where we measured the river. Sometimes when we were measuring the river there were man-made objects which made it quite difficult for us to measure. If I was to improve my results I would measure the river in a different place so nothing would be in the way. One of the main problems was proving the theory correct. The speed of flow didn't follow the theory because the middle course of the river was faster than the lower course. This was because there was a man-made weir which affected the speed. The width of the river did followed the theory, the depth also did because I included the two points either side of the centre of the river to be the centre because there is no definite centre. The load of the river also proved the theory correct by dong an overall average by man or nature. In the upper course there were lots of branches and bushes, and a man-made weir at the lower course of the river. We could take this project further and take measurements on a bigger river to see if the results would vary. I would also use updated equipment such as a speed camera which would record the speed accurately and I would have picked average sized rocks for the courses to make the results more accurate. ...read more.