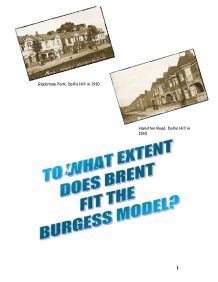 how brent fits the burgess model

1. Introduction * The location of Brent in Greater London 3 * Urban Models 5 * Aims of the investigation 11 * Applying the Burgess model to Brent 12 * Hypotheses 14 2. Methods 15 * Choosing sites around Brent 15 * Methods of collecting Primary data 16 * Methods of collecting Secondary data 19 3. Results and Analysis 20 * Primary data: Results from the 5 sites 20 * Secondary data: Demographics 44 * Secondary data: The geography of Brent 48 * Secondary data: The value of land 53 * Secondary data: The history of Brent 54 4. Conclusion 60 5. Bibliography 62 The aim of this coursework is to see to what extent does Brent fit the Burgess model. In order to do this I will carryout fieldwork in 5 areas of the London Borough of Brent. I will investigate the differences and similarities of these areas and then see if I can find any evidence for zones of the Burgess Model or whether they fit into another model. Brent is in North West London and has 21 electoral wards such as: * Alperton * Brondesbury * Dollis hill * Harlesden * Kensal green * Kenton * Kilburn * Kingsbury * Preston * Stonebridge * Sudbury * Tokyngton * Wembley * Willesden * Queensbury * Fryent * Barnhill * Wembley central * Mapesbury * Welsh harp * Dudden hill Brent is divided into 21 electoral wards it was created in 1965 during the re-organisation of London's Government. The name derived from the River Brent which runs through the Borough. Brent borders Harrow to the northwest, Barnet to the northeast, Camden to the east and Ealing, Hammersmith & Fulham, Kensington & Chelsea and Westminster to the south. Industrial Revolution and Urbanisation in the U.K The Industrial Revolution took place in late 18th century and early 19th century, it first started in Britain and then went around the rest of the world, this led to many inventions such as the manufacture of machinery and the introduction of steam power which was fueled by coal, making easier to make things and get work done. ...read more.

Rushout Avenue is off Kenton Road. The area has mostly semi-detached and detached housing. Types of Houses: The pie chart shows me that semi-detached housing is the most common type of housing followed by detached housing on Rushout Avenue. This supports the burgess model because there is supposed to be a mix of both semi-detached and detached housing in the outer suburbs. However starting from Queens Park there has not been much of a major pattern of change in house types showing because there was semi-detached in Queens Park, semi-detached in Willesden Green, and terraced in Dollis Hill and semi-detached in Preston. Age of housing: The bar chart shows the houses in Northwick Park have been made between 1900-1950. This supports the burgess model because the houses are supposed to be built during the 20th century. It also supports my hypothesis; houses are supposed to get newer as you move from South to North Brent. However the houses should have been built after Preston because it was developed after. Queens Park, Willesden Green and Dollis Hill is pre 20th century, and Preston and Northwick Park is after 20th century. Environmental Quality Survey: The radar graph shows that environmental quality is outstanding with each section on 2. This fits the burgess mode because as you move from south to north Brent because, traffic reduces, the population decreases and the quality of the environment are up to its best, and this shows concentric development. The graph also shows the area is much more peaceful and much more modern, compared to the inner city and inner suburbs. This supports my hypothesis; the environmental quality improves as you move from south to north Brent, meaning the area is for high class residential. Picture of Typical Housing: The photo shows the houses are getting bigger with low density housing. The house shown in the photo seems a bit tattered in building material, as it is wearing out, however other houses on the street well very well maintained. ...read more.

to work, however the people living in the Inner suburbs might only have one person in the family going to work, because the are much wealthier. The chloropleth map shows that there is a general pattern of the wealth increasing as we go from South to North Brent. Most of the households in the Outer suburbs have an overall high percentage of number of cars e.g. Queensbury, Kenton, Northwick Park and Preston. This supports my hypothesis that there is an increase in wealth of as we go from South to North Brent. Some of the evidence I found showed that it did not support the Burgess model emphasising its limitations. However other urban models such as the Hoyt Sector and Multiple Nuclei model could, this because they include transportation routes etc. The burgess model does not consider transportation, which has a impact on the industry and urban growth. In conclusion, after my investigation I found that most of my data supports my hypotheses and the Burgess model. However the Burgess model did prove to have some limitations that is why it could not explain Dollis Hill's land use patterns, having industry located in the area and it is in the Inner suburbs with lots of terraced housing. The multiple nuclei model and the Hoyt sector model could explain things like transportation which the burgess model couldn't. Overall Brent supports to the Burgess model as we can see concentric development by the data showed throughout this investigation. However there was other evidence to go against the burgess model such as the Hoyt Sector model and the Multiple Nuclei model there. Therefore, Brent fits the Burgess model to an extent. I could have improved this investigation in many ways, by choosing more appropriate sites that go in a straight line from South to North to then see the exact pattern and difference as we move further away from the CBD. This way the data would have been more reliable and accurate. ?? ?? ?? ?? 1 ...read more.